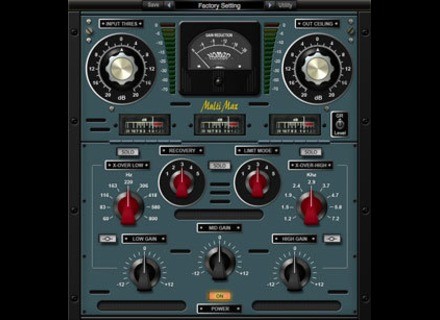 Nomad Factory A.M.T. Multi Max
5
The Nomad Factory A.M.T. (Analog Mastering Tools) Multi Max plug-in is one of three found in the Analog Master Tools bundle. You can only get this plug-in as part of this bundle, and it's the most in depth of the three in it. It's more or less a more complex version of the AMT Max Warm plug-in. I don't own this bundle of plug-ins myself, as I've only used them on the systems at the studio where I work, so I didn't have anything to do with the installation process here. Using the plug-in isn't necessarily hard, but there is a decent amount going on that you need to be aware of. From top to bottom, it's got parameters for input threshold and output ceiling for the limiter, as well as five limit modes and recovery time to set. It then has a three band EQ on the bottom with high and low band frequency controls. Any experienced user won't need a manual for this...

The main system that I've used the Nomad Factory A.M.T. Multi Max plug-in on at the studio where I'm employed is Pro Tools HD based and is running on a Mac Pro computer with 10 GB of RAM and dual 2.66 Ghz Intel Xeon processors. We've also got a Neve 8068 console and Apogee converters. While it's designed for mastering, if your system can handle it (which this one can), it's suitable for mixing as well.

The Nomad Factory A.M.T. Multi Max is definitely the most versatile in the Analog Mastering Tools bundle, taking the best of the other two plug-ins in the bundle and putting it into one. I've used this one mostly for quick mastering jobs, but use the others more for mixing. It's not going to be your one stop shop for mastering, but for simple home studio mastering, it's definitely adequate as a plug-in and as a bundle as a whole. The bundle is incredibly cheap, as the Nomad Factory bundles give you some of the best bang for your buck out there. The A.M.T. Multi Max plug-in in terms of sound is definitely warm sounding for a plug-in and is incredibly versatile. I don't know if this bundle would be the best way to go in terms of home mastering, but they're great plug-ins to have around for all purposes...
Did you find this review helpful?yesno
»