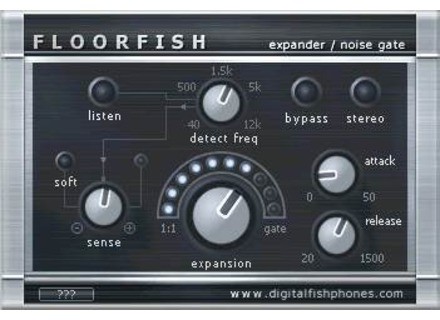 Digital Fish Phones FloorFish
4
Digital Fish Phones FloorFish plug-in is a free sidechain expander/noise gate plug-in for Windows systems. It’s available as a VST and Audio Units plug-in for Windows & Apple based operating systems, the reason for this most likely being because Digital Fish Phones isn’t exactly a commercial company. It seems to me that it’s just a guy or a few people who developed these plug-ins a few years ago. You can still download this plug-in straight from DFP’s website if you’ve got a compatible system. This is a quick process from what I remember as I downloaded all of their plug-ins at once, although it was a few years ago. The interface of FloorFish is very easy to follow, although you should know the basic purpose of what this is for. It gives you parameters for detection frequency, expansion, sense, attack, and release. Even if you don’t know all that much about expanders and gates, this is good place to get started since it’s only got the basics. I highly doubt there’s a manual for this…

While I'm no longer running the Digital Fish Phones FloorFish plug-in on my system, when I did run it, it was in Cubase SX and on a Hewlett Packard Pavilion dv8000 lap top with a 3.0 Ghz processor and 2 GB of RAM. I don’t remember having too many issues running this, as I would really only use it when on drums when I was looking to gate them. I remember running a few instances at once without a problem, but it has been a little while.

When I used to run the Digital Fish Phones FloorFish, I used it a decent amount for gating tom tom drums and unwanted noise here and there. I rarely used it as an expansion, but it’s also pretty effective for this purpose as well. It’s not the most effective of it’s kind as the Waves plug-ins I have now to do this definitely work a lot better, but for an older plug-in and being that’s free, it’s a must try. Unfortunately not all users will be able to try this one, but for those who can I definitely recommend that you do so.