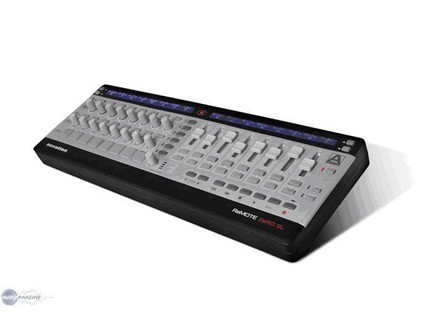 Remote ZeRO SL, Other MIDI Control Surface from Novation in the Remote series.

Novation Remote ZeRO SL
4
This is a copy of one of my posts in the forum:

I wanted to share with you my impressions of the controller and the novation automap.
I'm on the forum because I know that people sometimes post netting.
I'll post as the opinion section.

I find the concept really super good.
There are thousands of midi controllers on the market and innovations are for me the only one worth it.
I had just about every and each time I was disappointed by either the quality of manufacture (eternally plastic) side and oriented "live".
In fact most are made for the live, on uc-33 for example (everyone uses while it is horrible) with Ableton live, we make an apple + M and assigns almost everything what we want.
But the studio to share the mackie control (for once only studio oriented and overpriced) there is not much.
Both meet the innovations and it is very good.

It is very good but of course it does not work that well, it would be too good.
I recall that I have the first version but since the firmware is the same as the new one, I guess the machines are identical.

- The first problem is the lack of space between the knobs.
I imagine that it is important that the controller is transportable and must go to the economy but it is really tight. Handling live knobs can be quite frank, there I am obliged to turn the fingertips.
Why have not deleted the edit buttons in the center? This is a usb machinery which is mainly used with a computer (which does not have a computer today?), One would have imagined that the editing controller parameters is done through software innovation.

- Then there is the recovery value of cc by different controls.
The knobs are supposed infinite avoided jump values, it works pretty well but we need to turn the knob a few degrees before starting to change a setting.
I do not speak but not normal knobs.

- The automap is really the big advantage of this controller, it is finally the voice of a universal machine. By mark against my daw is not always the controller.
I sometimes have to reboot several times before the controller is detected.
It often touches crisis nerds.
The automatic mapping is not hyper point either. It would have been quite a few together some basic function in the same places that the user have pins.
Kind for synth + cutoff + resonance envelope in the same places.

- The pads are MUCH too hard! The mpc it tells you something?

- Finally, it concerns the new version: But why did you delete the second screen???
Why go back???

Again I find this system very hyper automap, I accommodated all its flaws, and again after all the templates I am getting returned and I know the tricks to make it work properly.
But what I find distressing is that innovation is close to the perfect product for those who make the computer music. Vst to control its universally and separate from this damn mouse.
But there is still ....

If you have any other comments similar it would be nice to share them here.
These people have included in innovation.
I look forward to the v3 controller.
I imagine that it is expensive to develop the perfect product, and that sells more when the price is low, but why the world is abandoned noon? Why not make a line "public" and line "upscale", as speakers, mixer etc. ...

Gentlemen in innovations help us please. "

6tm-d's review (This content has been automatically translated from French)

Novation Remote ZeRO SL
5
I just got a little deeper than the photo (misleading) but rest assured you no more than 5 cm in height;
Otherwise it really be the air of a professional finish treats (c is not evolution!)
there really is something to have fun, bought to play with Ableton LIVE I think I m not bored! assigns all s super easy if c is not already included in the automap (forty preset)
Carment RAPORT quality price not bad at all found has all nieuf Neuros 285!
not nothing at all, I do not regret this purchase
Did you find this review helpful?yesno
»

Z-machyne's review (This content has been automatically translated from French)

Novation Remote ZeRO SL
5
HELLO!
it's been good to go a few months that I have zero SL and I'm really count!
The two screens is the top, the faders no end is the top, the sweetness of the pots is really cool finally too good to be sound.
The bad part!! painting goes around the buttons (in intensive course not use "very soft") and its case plastoc HAIIIIIII

Document02's review (This content has been automatically translated from French)

After misadventures as collateral, the new model holds up. In short a nice controller if you do not have to for service.

three months, one to three hours a day.
then three months, on average one call every three weeks for service.
Pui six months the new model, no problems cettes time around. In addition the new Automap 2.0 is a killer. VST controls set themselves in a simple and intuitive, a true happiness. I chose a setting, I move, control, I move, hop, is in memory. do it again in a loop until you have all mapped the end of learning, becoming a VST memory.

- What is so special that you like most and least?
Bought only for use with Reason, the display functions directly on the screens is very convenient. Whatever instrument you see immediately what are the controls.

We find an equivalent function on the VST with the Automap.

The amount of controls available is attractive, and their touch is rather pleasant, if not perfect. As against their arrangement, which is normally the same for all programs (understand that it is always the same pot used for frequency during the automatic configuration) is not necessarily the most common.

The pads are hard and very sensitive medium, too small to be really useful.

270 ° knobs are rather specific and their touch is nice.

The potentiometer has an infinite slight tendency to scratch and their accuracy is poor. after a few months scratching disappear, but the accuracy when running fast is hard to manage.

Upon receiving a slight lateral movement at the faders is not pleasant. Also the paint peeling on the edges of them after a few months and the case is soft on the side of the faders. No big deal, but a little annoying.
The display shows the details of checks by horizontal row. a button on the side of each row to switch between a series of controls to another. The switch controls the display of a row to another is slow, the buttons are malfunctioning, and the controller changes the display even when automation software is changing the parameters themselves, which removes much of the advantage of displaying live, and make use of the controller more difficult in the configuration pre-allocated. on the other hand for use in component is fine, especially when you have a memory lapse on how the controls are assigned.
Big downside, the biggest, most annoying: the screens are of a quality as bad as the service. False episodic contacts after two months, total failure of the display after three months.
Party for repair immediately (the store where I purchased the product is effective), it took three months to ... to exchange standard.
Also note that the pictures on the product appears quite late, it's an optical illusion caused by an unchecked from the face of the deep and remote. This is actually quite bulky.

I also regret the absence of a stick.
- Have you tried many other models before buying it?

little. But ultimately the potential of this model are not found elsewhere.

If your unit works well, it's a good product. if you have to do for service, it's a different story. That said I understand that Novation had changed SAV responsible for France, which may have solved the problems I had.
Finish degrades rapidly with use. (Pulls paint), when the rest of the controller's fault, it is for against considering they are in line with the low purchase price, so defects normal for this type of material.
- With experience, you do again this choice? ...

I would hesitate a long time. Problems with the VAS cooled me greatly, but the new model I was still very pleasant to use. I will begin with a tour of the existing to see if we can find an equivalent model with a more reliable manufacturer.
For against one thing is certain, I would probably take with a keyboard finally have multiple master keyboard is convenient to move from one application to another without having to reconfigure everything.

Other Novation other MIDI Control Surfaces