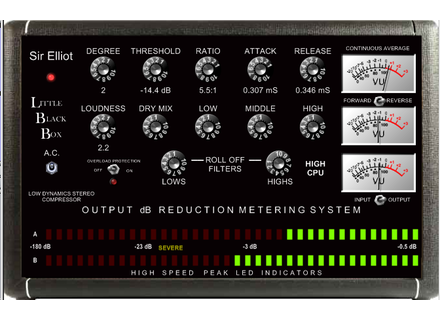 airwin's review (This content has been automatically translated from French)" Superb"

Sir Elliot Little Black Box II (M)
5
All is well. No manual, no need, there are details on the site.

I use samplitude 11 pro on a computer Acer Intelcore I3, RME Fireface UC Card. No worries.

It is free, as everything that Sir Elliot. I downloaded two days ago. I already knew his ancestor early in the year Sir Elliot Little Black Box which I was looking for a possible update, and for me that was already one of the best compressors available (I know UAD, Waves, Urs, etc. I almost tried everything ...) on the market (free, as I recall, this one). Longer available, then replaced by Sir Elliot Little Black Box II (M).
It is the ultimate compressor Sir Elliot (he will focus on other things). Beautiful sound analog (I regret a little the next most "fat" of the first model). The usual settings are there compressors. He now has the visualization (input, output, gain reduction) in addition to EQ (button low, medium and high to climb, roll off two buttons to decrease bass and treble) that can chop, change the overall sound, the character of the machine, so it looks like a real nice device and hardware. A final limitation is activated. It uses little cpu.
AF unnoticed on its release I think it deserves a try. For me it is to adopt, and sometimes twice a day!