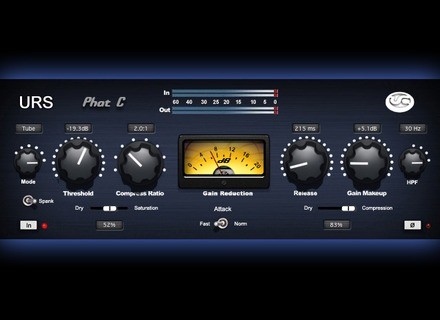 URS Phat C
4
The URS Phat C is a analog sounding compressor that you can use on individual channels and multiple times and not have to worry about any crashing or freezing. The URS Phat C seems to be very stable and it comes in at a great price 99.99. You can run it on Macs and Windows 7, Windows Vista and Windows XP. It gives you 6 different analog saturation modes, VSA, FET, Tube, Tape, Transformer, and Opto. Along with 2 different kind of attacks (fast,normal). I use URS Phat C as a plug in with Sonar and Cubase. I have even used it as a plug in for my video editing program to compress audio in Final Cut pro. The interface is very simple and easy to understand you get a total of 6 knobs and 2 sliders. Everything is labeled and it is right on the main interface. There are no sub menus or small unreadable text. I have not seen a manual for URS Phat C, but you will not need one because it is self explanatory and easy to understand.

I have a Windows 7 OS on my dual channel 8GB desktop and it loaded correctly and worked fine. I have been using this plug in since mid 2011 after stumbling across it on KVR audio. All of the functions of URS Phat C work great.

The URS Phat C will give you a great recreation of vintage harmonics. When using those effects along with the compression you will be able to get a really heavy and rich sound to have in your mixes. You can play around with this plug in on voices and instruments and watch all of the cool stuff you will get out of it. As I said, you can run it multiple times and not have to worry about it crashing. I have had it running on 10 plus channels before at the same exact time and never experienced any issues. The program is very light on your CPU and can work in probably any DAW. I highly recommend it.

URS Phat C
5
The URS Phat C is a unique saturation and compression plug-in that models all sorts of different types of analog saturation, including tube, tape, VCA, opto, FET, and transformer. I installed the plug-in along with a number of other URS plug-ins, which was easy enough and not unlike installing many of the other plug-ins that I've got. The interface of the plug-in is straight forward and is the exact opposite of convoluted, consisting of a knob to choose between the six modes, as well as parameters for threshold, compression ratio, release, gain make up, and a high pass filter. It also has mix sliders for both compression and saturation and a switch to set either a fast or normal attack. Lastly, it has a 'spank' switch which is an alternate mode for really hitting your signal as hard as possible.

I'm currently running the URS Phat C on a Mac Book Pro and in Pro Tools LE 8. The computer has a 2.2 Ghz Intel Core 2 Duo processor and 4 GB of RAM to play with, and I'm running Pro Tools LE with a Digi 002R or a Digidesign Micro Box if I'm not working from home or in a studio. This plug-in really doesn't seem to take up much processing power since I've never had an issue running it within this system. It's always hard to say how well a plug-in will run on a given system, but this one seems as safe a bet as any.

The URS Phat C is one of my favorite plug-ins from URS, which is saying a lot as I'm really a big fan of their software. This one is just really cool because it's unlike any I've used before. While it's a compressor, it's also a saturator, and the different modes are cool because they are emulations of real analog gear. I also like that it's super easy to use in a nice compact interface. The sound of it is definitely impressive and it's a great tool for warming up your sound, however, it's not a replacement for real analog gear as in my opinion no plug-in will ever be. That having been said, this sounds pretty awesome and is about as close as you'll get to a digital version of analog saturation. URS has been dropping their prices, so the Phat C is pretty much a steal at this point. Definitely do yourself a favor and at least give the demo a whirl to see if it might be useful to you.
Did you find this review helpful?yesno
»

Published on 01/11/10
URS has announced the release of a Public Beta of its new compressor plug-in, Phat C, a multi-purpose analog-sounding compressor for individual tracks and buses that replicates characteristics of sev…