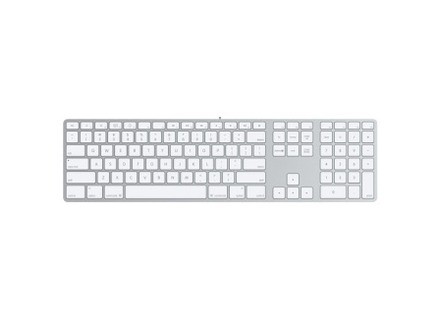 Apple Slim Keyboard
5
The Apple Slim Keyboard is one of the newest computer keyboards that Apple has to offer, save for the wireless version of this slim keyboard. I don't believe that 'Slim Keyboard' is the proper name given to this keyboard, but Apple doesn't really distinguish names between their different keyboards as they come out. This version I only recently used extensively for the first time. I regularly work with a producer as his engineer and he just got his home studio happening, which includes this keyboard for controlling the computer. I've used a few other Apple keyboards, but this slimmer model is definitely up there with the most comfortable computer keyboards I've used in general. I love the slim feel to it as it's really easy to manipulate it in any way you might need to. Of course there isn't that much of a difference between this and the Pro Keyboards from Apple, but there's certainly a different feel to this one. All of Apple's keyboard will more or less do the job, but this one is certainly a bit easier on the eyes and has a really fluid feel when you press down any of the buttons. It's also nice that it takes up as little room as possible on your desk, and has two USB jacks on the sides of it for plugging in a mouse or otherwise. They're now making a wireless version of this keyboard, so this can be had for a bit cheaper than it was when it came out I believe. I don't know if it's worth spending too much more on this when compared to the Pro Keyboard, as both do the job just fine. If the price is really close however, I'd definitely choose the Slim Keyboard for it's overall feel and look, but it's not going to be worth it if it's too big of a price difference.
Did you find this review helpful?yesno
»

Other Apple pC Keyboard and Mice