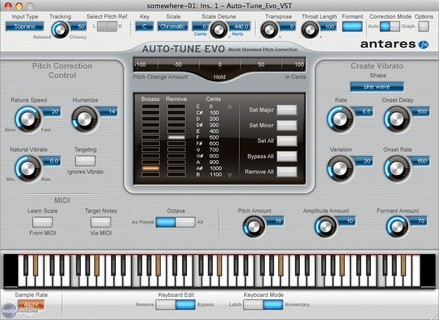 Antares Audio Technology Auto-Tune Evo
4
Antares Auto-Tune Evo is a pitch correction software and pitch detection plug-in. Surprisingly one of the main reasons that I use this plug-in is not for pitch correction but for pitch detection. When working with some artist songs I need to know what key they are singing in, in correlation to what key the actual instrumental is in to know what changes need to be made. Now not all the time is the Antares Auto-Tune Evo 100 percent correct with the notes and keys that it gives back but it is generally only about a half step away at the most.

Installing it was very quick, this software does not take much of your hard drive space up and you can use it with a bunch of different DAW programs. I have used it with everything from Pro tools, to Cubase and FL Studio. It looks and works exactly the same in each program that I open it up with.

If you use the auto tune side of it then you can really edit how you want it to change the pitches. Some people are good singers but they have a hard time singing on key. I think this is the perfect solution to getting them on key. You can even make it a smooth correction so you can barely tell that it was even auto tuned. If you want to intentionally make the auto tune known then you can do that as well like some of the old songs of the 80’s (and the style that’s actually coming back now in pop and hip hop music).
The Antares Auto-Tune Evo is a must have or any engineer because you never know what an artist will throw at you. They may be way off key when you get the song and if you don’t have the artist in the studio with you to redo it then you will have to correct it. Sometimes certain artist just cannot get into key so you will have to fix it for them. It is easy to fix anything with the Antares Auto-Tune Evo plug-in. Some singers need to be thankful that this program exists!

Antares Audio Technology Auto-Tune Evo
5
Ah Auto-tune, the saviour to our worlds most terrible singers and the single piece of gear that has made singers all around the world...lazier.

Auto-tune runs just like every other vst really, barely ever crashes, simple as anything to install and there are about a ton of helpful vids on how to get the best from it. All options are very visually right in front of the user so its pretty straight forward to use once your used to it.
Of course as always theres a nice and easy to understand manual if you need it.
Auto-tune is straight forward in the way that you can easily just move your originally notes up a touch or completely soar your c1 note up to a f#4 in a matter of seconds (i just hope your not expecting to sound normal...).
of course for all you rappers/hip hop/pop musicians out there you can get that long sought after t-pain robot sound effect simple by drawing straight lines over your graph on the notes you want!
woooohooooo!! to vocal laziness!!!

The software works perfectly as intended, produces that perfect pitch vocal/instrument sound whilst adding its own timbre to vocals which in my opinion when used right can sound amazing!
though when used wrong... disaster is sure to follow in the way of recycled over-autotuned garbage vocals as seen in todays pop culture.
Iv'e used autotune Evo for a long time since it first came out and i am glad i have it.. lets face it, some singers have bad days... months... lives.
And I've dealt with a few.

I cant really say anything bad about auto-tune itself, its a great tool when used right. The price is good i guess and there are tons of other versions out there but in my preference and opinion this is the best/easiest.
if you have no idea what your doing there's an auto mode, if you want certain notes doing certain things... get on over to the graph side of things.
Now i know this review seems as though i hate auto-tune... that is not correct, i absolutely love auto-tune when its used with taste and if the person using iit can actually already sing!
Auto-tune evo is a must have for any budding studio engineer!

Antares Audio Technology Auto-Tune Evo
5
I can't say anything about the installation process with the Antares Systems Auto-Tune Evo as the one that I have used was already installed on the studio's computer.  I don't think that there were any issues related to installation, but can't say for sure as I wasn't the one installing it.  Since it does work with the system that I've been using it on, I do know that we didn't have any compatibility problems.  The interface of the software isn't hard to follow and is very similar to the last version of Auto-Tune and other versions as well, so if you have any experience with other Auto-Tune editions, you should be able to catch on to this one quickly.  The manual is put together well, but I didn't need to look at it much as I was familiar with previous versions.

Since I have been using Antares Systems Auto-Tune Evo on a Pro Tools HD system, this plug-in has run flawlessly.  I can't say how well it would run on a Pro Tools LE system or something equivalent, but I do know that I have been able to run previous versions of the plug-in well on an LE system and this version isn't all that much different.  I have only used one of these plug-ins at a time in a single session, but I think it will run fine granted that you can already run plug-ins well on your system and have an overall adequate system.  I only first used this version of Auto-Tune a few months ago, but feel I've been able to adapt quickly to the new interface.

Overall, Antares Systems Auto-Tune Evo is the best version of Auto-Tune to date as it sounds cleaner than its predecessors.  While I generally prefer using Melodyne to tune vocals as I think it sounds smoother overall, for using auto mode this plug-in is the way to go.  The price isn't unreasonable and is definitely affordable for both home and professional studios.  If you are looking to get your first tuning program, I would suggest trying out both Auto-Tune Evo and Melodyne to see what will best suit your style and preference.  All in all, this is a powerful plug-in that is definitely worthy of being using if you are looking to tune.

Published on 09/01/09
Antares has updated the Mac versions of all its current products.