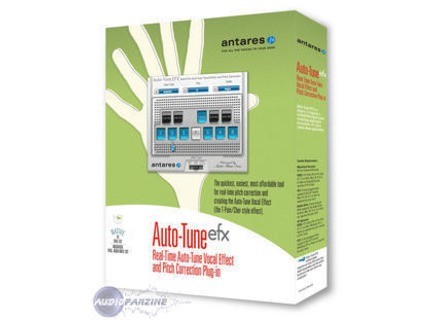 Antares Audio Technology Auto-Tune EFX
4
The Antares Systems Auto-Tune EFX is a stripped down version of the popular Auto Tune software that allows only for using it as an effect. Auto Tune was originally made for pitch correcting purposes, but with everyone using it as an effect nowadays, Antares has decided to capitalize on this and issued out this EFX version, which is cheaper and limited. You can do everything that this one does in the full version of Auto Tune, but not vice versa. I don't own this version of Auto Tune at home, as I've only used it a few times before and because of this I wasn't involved with installation at all. Learning how to use the software is pretty much fool proof, as they've made it as simple as possible for anyone to use this without needing knowledge of other version of Auto Tune. The plug-in has slide down option menus for choosing the voice type, the key, and the type of scale, as well as the ability to set your own scale or to add or remove pitches from the preset scales (which has pretty much every scale possible). It also has three different effect types - hard effect, soft effect, and a pitch correcting mode, which is the effect used lightly. A manual shouldn't be necessary here...

This plug-in doesn't seem to take up too much processing power, but I don't own the Antares Systems Auto-Tune EFX plug-in, so I can't give a full breakdown of the system that I've used it on. A friend of mine bought this plug-in recently as he likes using the effect to help guide his vocals along when they aren't done. I also do the some on occasion, but I have the full version of Auto Tune so I don't have a use for this one. As long as you have a system that is able to handle some plug-ins that you currently have, you should be all set.

The Antares Systems Auto-Tune EFX is definitely a cool idea, as not everybody needs graphic mode in Auto Tune. If you're just using it for the effect, this is a good way to save a few bucks and get the same sounds in an easier, more user friendly interface. For me I need the full version of Auto Tune, and I'd probably recommend going with that if possible, but if you're really strapped for cash and want the effect, this will do just fine. Definitely worth looking into if you're a heavy user of the Auto Tune effect...
Did you find this review helpful?yesno
»

Published on 01/09/11
Antares Audio Technologies has announced the worldwide availability of the Auto-Tune EFX Vocal Toolkit.