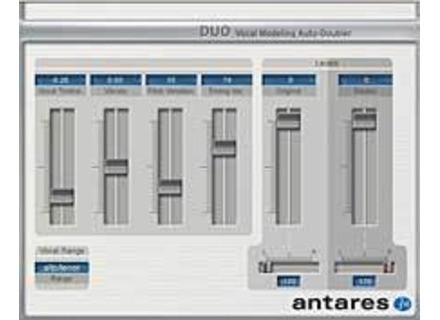 Antares Audio Technology Avox Duo
4
The Antares Systems Avox Duo is a vocal doubler plug-in that is available within Antares' AVOX vocal toolkit bundle of plug-ins. There is a newer version of this plug-in within the Evo bundle, but I've used this one primarily. I didn't have any problems at all installing the bundle on my system, as it was unmemorable since it was just like installing any plug-in pack. Learning how to use the plug-in is also really easy, as the interface consists of a series of sliders to control the sound of the double vocal and the mix of the two. The parameters available are for vocal timbre, vibrato, pitch variation, timing variation, and for setting the levels and panning of both the original vocal and the double. You can also set what kind of voice color you have to make it track best. I've never seen a manual for this plug-in...

I'm running the Antares Systems Avox Duo in Pro Tools LE 8 currently on a Mac Book Pro that has a 2.2 Ghz Intel Core 2 Duo processor and 4 GB of RAM. I run Pro Tools LE with a Digi 002R audio interface or a Digidesign Micro Box if I'm on the go and I monitor everything with a set of Adam A7 monitors. I've never had a need to run more than one of these at a time in Pro Tools, so for what I've used it for I've never had a problem with the performance of this plug-in.

While definitely a cool idea, I'm not sure that the execution on the Antares Systems Avox Duo is the best. It sounds decent enough, but it's definitely not a very realistic sounding vocal doubler and I wouldn't print with it for any real mixes. The tracking isn't the best on it, but it's decent enough if you're just looking to add a little bit of depth. Honestly, if you want a vocal double I don't see why you wouldn't use add a second voice to your recording. This is a quick way to get a double vocal in there, but again, I wouldn't use it in a serious mix. I'd recommend trying out the Evo Duo if you're seriously interested in the plug-in like this, as that one sounds a bit better. If you're interested in the other plug-ins in the Avox Toolkit bundle, it's at least nice to have this one, but I wouldn't get this plug-in pack for this plug-in alone.
Did you find this review helpful?yesno
»