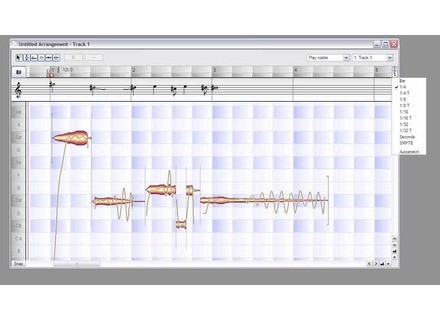 Melodyne Plug In, Pitch Shifter / Time Stretcher from Celemony in the Melodyne series.

Celemony Melodyne Plug In
5
Getting started with Celemony Melodyne is easy. The software is downloaded off their website and installed in a matter of minutes. I use the plug-in inside Pro Tools. It used to be that to use the software, it had to run over ReWire which was a little bit of a headache. Having it run as a plug-in is much better.
The interface is easy to use. Basically you start out by clicking the 'Import Audio' button and playback the signal you wish to edit. This has to be done so that the plug-in can record the sound for internal processing. After playback is finished, then you can edit the signal in many different ways.
The signal can be edited to correct pitch, but also the timing of the individual notes can be moved. Vibrato in the signal can also be adjusted.

The software is very stable as a plug-in for a DAW. I have only tried it with Pro Tools, but I imagine it is just as solid on other platforms.
How good does the pitch correction work? The pitch correction is very good but depends on several things. First, recording a signal 'dry' will help make the analysis of the signal better than if there is a lot of reverb or echo in the recorded signal. All these kinds of effects should be added post-Melodyne. For the most part, the pitch correction sounds very natural and does not have the extreme 'auto-tune' sound. Although, if you really want to, you can do this with Melodyne too. Having a good performance to begin with also helps. Finally, giving the software a long signal to analyze will result in better performance. Occasionally when I try to have the program analyze one or two note it has a hard time coming up with accurate results.

Celemony Melodyne is a necessary tool of the modern recording studio. Some people will complain that it is 'cheating' or that pitch correction takes away from the 'realism' of the performance. To some extent I agree, however if used in moderation pitch correction adds to a performance and doesn't take anything away. This kind of processing is used on almost all recordings these days, and is even more popular than extreme auto-tune effects. After using it for a long time, I can't imagine trying to work on a project with out it. There are many other products that do the same kind of thing as Melodyne, however I have not tried them. I started using Melodyne when it originally got started, and I have stuck with it ever since. I also like that they are continuing to innovate by expanding pitch correction to polyphonic recordings rather than just monophonic signals. The potential for creativity is crazy with being able to transform the pitch of individual notes in a guitar chord or piano chord.
There is also more potential for innovation in the future now that Celemony is working with DAW software developers to have a plug-in format where the plug-in can directly access the signal without having to play it back the way that it does now. I can't wait to see what the future holds for Celemony Melodyne.
Did you find this review helpful?yesno
»

Celemony Melodyne Plug In
5
I didn't really have any problems installing the Celemony Melodyne Plug-In, and it has continued to work without any problems. While the interface does take a bit of getting used to, once you get the hang of it it begins to all make sense. There are a few of different things you can achieve with the plug-in, the most used by people being the pitch correction. I had previously used Antares Auto-Tune and it took a little bit of adjusting to Melodyne, but now that I've played around with Melodyne it has become my pitch tuning plug-in of choice. I don't have access to a manual but I wish I had one as there are a lot of ins and out of this plug-in.

I run Melodyne on a Mac Book Pro with a 2.2 Ghz processor and 4 GB of RAM. I use it with Pro Tools LE 7.4 and have also used it with in Pro Tools HD. I run it with a Digi 002 rack version as an audio interface with Pro Tools LE. The plug-in runs smoothly on my machine and I have not had any problems with it since installing it.

I first used Melodyne about 8 months ago, after using Auto-Tune for almost three years and I couldn't say more about how much smoother the sound is with Melodyne. While they both have a bit of learning curve, someone with experience in audio should be able to figure it out Melodyne pretty easily. The tuning is extremely smooth and has a nice graph system that displays your audio, which is easy to manipulate and get whatever it is you want in tune. It is fairly priced considering how powerful the software is. While Auto Tune is powerful as well, after trying both Melodyne just sounds better on the ears to me. Can't wait for Direct Note Access!
Did you find this review helpful?yesno
»

Celemony Melodyne Plug In
5
The program installed without any problems. I didn't have any compatibility issues on my system. The installation and setup is very simple, other than a slightly annoying registration process that has too many steps. Other than that one thing though, installation is a breeze. The manual is very thorough and explains every function in detail. I will definitely say though that this program absolutely has a learning curve. There are many subtleties in using it that you really just have to pick up on for yourself. Two users of this same program could easily get very different results based upon their skill at using melodyne skillfully and tastefully.

It works fine on my XP based PC DAW. It's being used with an ASIO driver in the VST format with no trouble at all. It does tend to crash if you have too many instances open, so I would recommend to people to not have more than 3 instances of melodyne open at a time. If you need more, finish your work on the first 3, bounce and reimport the files, and pick up another 3 instances. The issue I believe is that melodyne tries to load too much data into the RAM, and it gets very unstable. If you keep it at only a few instances however, it works very well and is stable. It uses a fair amount of CPU power, so you wouldn't want to use too many at a time for that reason as well.

I have had melodyne for about 3 years. I absolutely love it. I couldn't imagine working without it now, knowing what it can do. This is really the secret weapon if you are working with a group where the singing is really not up to par. This can really help to take that problem entirely off the table. It is really amazing how much you can change the timing and pitch of a performance, and if you use it well, you can barely tell that it was affected in any way. This program has definitely been worth every penny, I can't say enough good things about it. I would definitely get it again. My only problem with it is that sometimes it makes S's and T's sound weird, but those can be replaced with the originals after the fact on particularly nasty instances. Other than that it's great!
Did you find this review helpful?yesno
»

One_'s review (This content has been automatically translated from French)

Celemony Melodyne Plug In
5
Installation is quick. 3Gz Pentium 4, Cubase 4.
only problem after installing the version supplied on the CD and did the update to the latest version of the site Celemony, the plug was no longer in cubase. He falllut uninstall it and re-install the latest version directly from the plug. Next, nickel.

Rant against the usual useless and licensing systems software emm ... those who pay: it increases the installation procedure, and you need a computer connected to Internet, send a file license application, copy the activation received ... it's heavy, it's heavy .... I think the dongle is more convenient but hey, it must buy more ...

The presentation software is simple, clear, like the philosophy of software

The manual is very well written and clear. One downside: paper delivered in English, the French version can be downloaded at the site of Celemony.

So note here mainly reflects the lack of printed manual in French (but that we are used), and severity of the damn system activation which was right every time ...

once installed, so good. I'm still running one instance at a time. A test with so many instances, this may happen frequently seen the interest and possibilities of the software.
no major bug so far, no crash accidental. But at the same time I just buy it. to do so over time.

Installed for me yesterday.
Simply put: this thing is ESSENTIAL ... Software is my dream without knowing there until a friend showed me ...

Of course, do not take the easy way, melodyne and we should not dispense with the best catches available. And melodyne does not add or interpretation or musicality to a power !!!!!

This program allows you to make a really simple editing, without taking the head. Is realigned quickly making a monophonic voice, bass solo. I tried on an old guitar solo played badly: it's illusion. The voice is terrible! It really helps to erase an imperfection into a power which is already also satisfied.
I've never been able to use the tools built into Cubase: too heavy, not intuitive ...
Melodyne is responsible for all the painful part of labor (detection of transitional links between notes, constant desire to make a result with a musical sense), and its interface is very simple, providing only what you need intuitively.

So a tool that it is hard to do without once you've tried ...

Did you find this review helpful?yesno
»
Read the 5 user reviews on the Celemony Melodyne Plug In »

Published on 11/10/08
Celemony has released a new service update for Melodyne plugin: Version 1.0.4 improves the stability and interaction with various hosts.

Celemony Melodyne Plug In manuals and other files

Other names: melodyne plug in, melodyneplugin