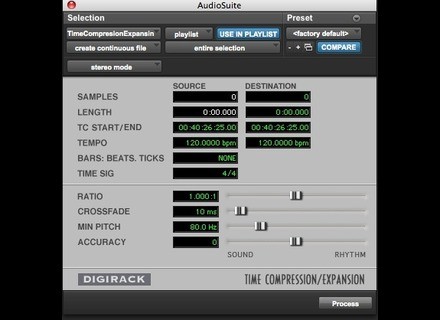 Digidesign DigiRack Time Compression/Expansion
3
Digidesign's DigiRack Time Compression/Expansion is a stock plug-in that comes free with Pro Tools LE and HD. I've run it both in Pro Tools 7 and 8, and I'm not sure if it comes with earlier versions, but it most likely does. You don't need to do anything to install the plug-in beyond installing Pro Tools, as during this process it takes care of installing all the DigiRack, AIR, and other stock plug-ins. The interface of the plug-in isn't too complicated, as it has a rather bland and uninteresting interface to make it as easy as possible to manipulate for new users. Basically you set what you are at right now and where you want to be in terms of the tempo, time signature, and all that. It's fairly self explanatory as I found that I was able to figure out how to use it very quickly. I'm not sure that they make an individual manual for this - if anything it would be in the Pro Tools manual itself.

Right now I'm running Digidesign's DigiRack Time Compression/Expansion plug-in in Pro Tools 8 on a Mac Book Pro that has a 2.2 Ghz Intel Core 2 Duo processor and 4 GB of RAM. I run Pro Tools LE 8 with a Digi 002R audio interface or a Digidesign Micro Box if I'm on the move. This isn't the type of plug-in that anyone will need to run too many of them, as most people including myself will only need one up at a time. Granted that this is the case, and even if it isn't, I don't think that users will have any issues running the plug-in.

While the Digidesign DigiRack Time Compression/Expansion can get the job done in terms of time stretching, being that Pro Tools has Elastic Audio starting with Pro Tools 7.4 I believe, there really isn't a good reason to use this. If you are seriously looking to do some time stretching, Elastic Audio will sound much much smoother than this plug-in and will also be easier once you know how to do. So while the While the Digidesign DigiRack Time Compression/Expansion will do the job okay, I'd recommend just using Elastic Audio since you've got it in Pro Tools anyway...
Did you find this review helpful?yesno
»