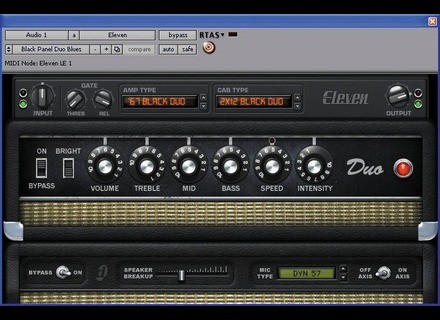 
1 user review
Find it in the classifieds starting at $99 Avg used price: $99

Digidesign Eleven LE
3
Digidesign Eleven LE is a software plug-in to be used inside Pro Tools. I am using Pro Tools 8 LE. Installation is completed by downloading the software off the Avid webpage. Authorization is done using an iLok.
This amp sim software is really simple compared to other plug-ins (pod farm, guitar rig, amplitube, etc). There is really only one menu with the amplifier and the cabinet. Of course what you are sacrificing are effects pedal and post-processing models, by only having the amp and cabinet. Many users would rather use separate plug-ins in a DAW to do things like compression, rather than rely on the internal compressors of an amp sim software, so this isn't a the worst thing to be missing.

Eleven LE has all the essential amps ranging from clean sounds (twin, bassman) to overdriven (Marshall Plexi, JCM800) to heavy distortion (Mesa Boogie, Soldano). I think the amp model sound a little different than all the other amp sims I have tried. I don't same they sound particular better or worse, but I definitely think the AC30 model sounds unique compared to the AC30 model from GR5, Amplitube 3, and Pod HD.
The cabinet modeling is the low-point of the software in my mind. There aren't a whole bunch of cabinets and mics included, but I prefer the cabinet modeling in almost all other software choices available.
When I use the software, I using just use the amp model and bypass the cabinet. Then I just use a different plug-in for my cabinet/mic simulation.

Digidesign wasn't not the first company with an amp sim software. There are a few good things about Eleven though - for instance, if you use Pro Tools, you can be sure the Eleven is optimized to run smoothly inside PT. Other software has to be designed for a bunch of different DAW platforms, so it won't be as optimized. It should be noted, that this software is pretty heavy on the CPU considering it only has amp and cab simulation. I had expected it to be lighter on the CPU considering it was from Digidesign. The most unique thing about the software is the 'speaker breakup'. I was disappointed with this feature, as I was really expecting this to be a cool addition. To some users, the speaker breakup might the software more realistic because it responds dynamically when you really dig in with your playing style. To me, I always keep the speaker breakup at a minimum.
Did you find this review helpful?yesno
»