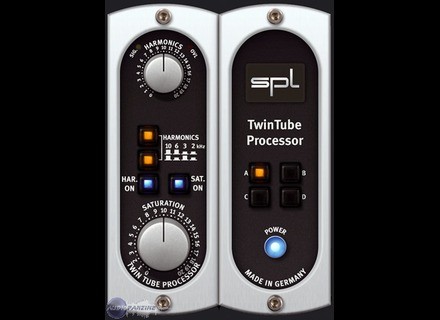 SPL TwinTube
5
The SPL TwinTube is a tube emulation plug-in that is one of the best of it's kind. I wasn't involved with the installation of the plug-in, as I don't own it and it was already installed and set to go at the studio that I've used it at. I don't believe that there were any compatibility issues or anything like that, as this plug-in is fully compatible with Pro Tools in both TDM and RTAS versions. It also can be used as a VST or a Audio Unit plug-in as well. The interface of the software is generally easy to understand, as it has the look of a piece of rack gear and isn't too hard to decipher. The two main parameters are for harmonics and saturation. Most of what you can do with the plug-in is in these parameters, as you can drastically change your tone depending on how you set these two main guys. The interface also has buttons for switching on both the harmonics and saturation parameters - you can use them separately or at the same time. It also has buttons for setting the frequency range in terms of the harmonics. I don't believe that manual is necessary unless you're having some sort of technical issues.

I've run the TDM version of SPL's TwinTube in a Pro Tools HD setting, with a Digidesign 192 I/O interface and an Apple Quad Core desk top computer. The studio where I used it has the newest version of Pro Tools, version 8, as well as Apogee converters and a whole slew of other high end gear. The outboard gear doesn't really matter in terms of judging the performance of the TwinTube, but either way I can't say that I've had a problem running it within this configuration as of yet. It isn't your traditional type of plug-in, so it's not like I've been using it on every track, but I have been able to run a good amount of them (like four or five) at a time within a single session without having any problems. I can't really say how well this would run on an LE system, but as far as the TDM version goes I've had no problems whatsoever.

I'm usually very very skeptical of tube emulation plug-ins, and I should start off this section by saying that I don't think that this, or any other plug-in will ever be able to truly emulate the sound that real hard tubes will give you. Having said this, the SPL TwinTube is probably the best one that I've used to date. You can easily warm up your sound with the TwinTube in a variety of different ways, as the harmonics and saturation settings both provide you with contrasting options. It can be used for pretty much any application where you might want some extra fullness or warmth, and I've used it on everything from vocals to kick drum. The price isn't out of the ordinary and is about right for what you're getting here. All in all I'd highly recommend the SPL TwinTube plug for anyone interested in a high quality tube emulator plug-in.
Did you find this review helpful?yesno
»