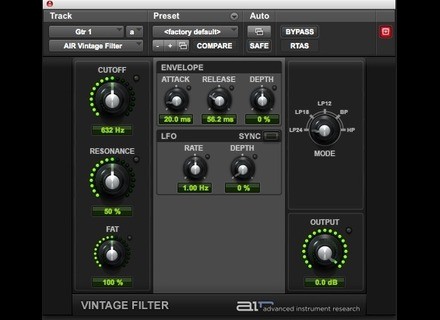 Digidesign AIR vintage filter
4
Digidesign's AIR Vintage Filter is a complimentary plug-in for Pro Tools 8 users, the newest version of the industry standard recording software. AIR plug-ins are the name of the free plug-ins for Pro Tools 8 under the Digidesign name, which stands for Advanced Instrument Research, although Avid, the parent company of Digidesign has decided they will no longer be putting Pro Tools out under the name Digidesign, and everything will know be on the Avid name. The plug-in isn't available anywhere other than in Pro Tools 8, which can be purchased on it's own or you can upgrade for an earlier version if you have it. You don't need to do anything beyond installing Pro Tools 8 to get the AIR Vintage Filter up and running, as it automatically will do it during the Pro Tools installation process. The interface of the software is pretty straight forward, as is the case with pretty much all of the AIR plug-ins, as they have a similar look and an easy make up to follow. It's got setting controls for cutoff, resonance, fat, mode, and output, as well as a section for an envelope and an LFO. The envelope section has parameters for attack, release, and depth, while the LFO has those for rate and depth. As you can probably gather, this isn't your typical filter in general. I don't believe that they make a manual for this plug-in or any of the AIR plugs.

Having just made the upgrade to Pro Tools 8 from Pro Tools 7.4, I'm running the AIR Vintage Filter plug-in on a Mac Book Pro that has a 2.2 Ghz Intel Core 2 Duo processor and 4 GB of RAM. I run Pro Tools with a Digi 002R interface or a Digidesign Micro Box if I'm on the go and not at home. While I haven't yet tried to tax this plug-in out within my configuration, for what I've needed it for I haven't had any problems at all related to performance. I've only had two instances of it up at a time, though. It really just depends on what type of system you're running it on, but I don't believe that most users will have problems.

Overall, the Digidesign AIR Vintage Filter plug-in is pretty versatile and powerful for a free plug-in. I can't really say too many bad things about it since it was free, but I'm not convinced that it is the sort of plug-in that I would buy if I didn't get it free, as it just isn't something that I would use enough to justify spending money on it. Having said this, I love having it in my arsenal as you never know when you might want to do some quick and easy creative filtering. While I don't think that I would say this has a 'vintage' sound at all, it does have parameters and the control over your sound that you would find on an older filter. If you've got Pro Tools 8, I'd highly recommend exploring both the AIR Vintage Filter and the other AIR plug-ins available in Pro Tools 8.
Did you find this review helpful?yesno
»