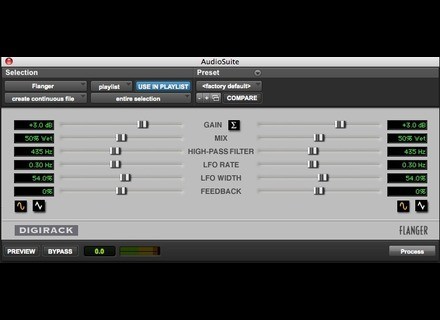 Digidesign DigiRack Flanger
4
Digidesign's DigiRack Flanger is a plug-in for Pro Tools LE and HD systems that comes free and in stock with the industry standard DAW. You don't have to take any action to install the plug-in once you've installed Pro Tools, as it installs all of the DigiRack and AIR plug-ins upon initial installation. As far as the interface of the plug-in goes, it looks just like most of the other DigiRack plug-ins, as I guess the thinking with the free plug-ins is to make them as easy to use as possible. The setting controls that it has to work with include those for gain, mix, a high pass filter, LFO rate, LFO width, and feedback. The plug-in can be used either in mono or stereo mode. I don't think that they've made a manual for this plug-in, although I wouldn't be surprised to find something about it in the Pro Tools manual itself.

I'm currently running the Digidesign DigiRack Flanger plug-in and Pro Tools LE 8 on a Mac Book Pro that has a 2.2 Ghz Intel Core 2 Duo processor along with 4 GB of RAM. I run Pro Tools LE 8 with a Digi 002R audio interface or a Digidesign Micro Box if I'm on the move. This definitely isn't the sort of plug-in that takes up much processing power, and also isn't the type of plug-in that most users will be running too many instances of at a time. These two things paired together makes me believe that almost all users will be able to run this plug-in hassle free, but if you have Pro Tools you should just try it for yourself.

The Digidesign DigiRack Flanger plug-in isn't the most in depth or versatile flanger plug-in available, but for a stock plug-in with Pro Tools, it gets the job done. I've only used it to do some simple flanging here and there, and many times I didn't even end up printing with it. It definitely comes off as digital sounding at times, but how much can you really expect from a free plug-in anyway. You can't run the DigiRack Flanger without Pro Tools, but if you do have Pro Tools I'd encourage you to check out this flanger plug-in before looking elsewhere...
Did you find this review helpful?yesno
»