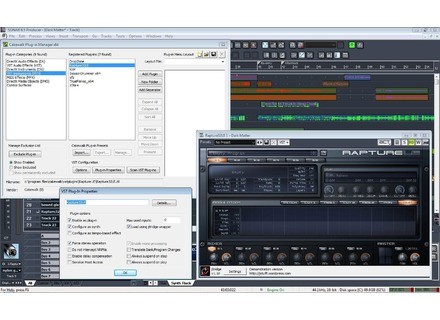 Pshaw's review (This content has been automatically translated from French)

J jBridge
5
Installing software without worry but the configuration is spoiled a bit ...
It is certainly a problem of law administrator or something like that but I had jBridge my files one by one. That said we did that once!
Few plugs / vsti are not compatible with jBridge but vstbridge takes over.
We must remember not to direct the sequencer to the case of original plugs if he takes the original apart, preferably in some cases where the two appear.
We need to check boxes in the options of the soft bottom of the window of each plug recalcitrant but, more often, they are rare and it does so only once. However the explanations are in English and sometimes lack of clarity.

Initially I took this software for bridge my plugins and sequencer vsti 32 to 64-bit but I finally returned to 32-bit Cubase (among other things because of some plug-ins that do not yet support the 64 despite jBridge like melodyne studio ), which was gaining stability and speed, leaving me to assume that the 64 bits will require more time to mature.
So I always used but in bits 32-32.
The advantage is that the level of ram each plug will open in a new instance. This means that each plug / vsti 32 bits can be with 2 GB of RAM and sequencer. Which provides the benefits of 64 with the stability of 32. Moreover it can also bridge of plugs 64 in 32 and 64 in 64 if necessary.

With 12 Gb of ram, I did a test to see if it actually worked and I could climb to more than 11 Gb. He still had that I run 7 batteries and a pair of virtual VSTis ...

I use it recently but it is day and night. Cubase 5 does not crash nearly over and is more responsive.
What I will wish for the future:
- A more ergonomic configuration
- A clear translation into French of options

For $ 15, this app allows me to sleep on my two ears and work without fear of a "serious problem" unexpected ... I can not say that there are more, it would no longer cubase; oP but they have become sporadic tolerable compared to before where, in my case, cubase 5 was unusable in working condition. I stayed on the 4 desperately awaiting the good fairy jBridge.

You will therefore understand that I do not regret this purchase and would recommend the same.
Furthermore the author had the good sense to provide a demo version, to validate the purchase with no surprises.

PS: the update ahead of Cubase 5.5 should theoretically solve the problem of vstbridge following the roars of users to be seen whether jBridge is always useful on a cubase 64.
Anyway, for the 32-bit, if the plugs vstbridge not open in a new instance with the same strength, jBridge still has a bright future ahead of him ...

Published on 11/19/15
Plugin wrapper/converter jBridge has been updated to v1.74 to best fit the latest Windows versions.

View all 2 videos of J jBridge »

J jBridge manuals and other files