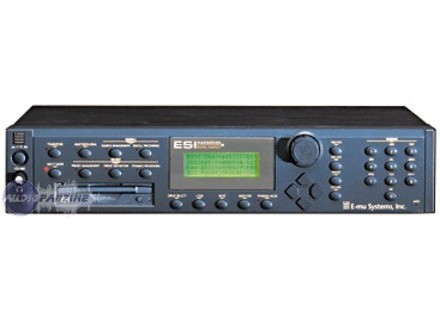 deejaymada's review (This content has been automatically translated from French)

After having enormously ram it I almost connai parcoeur
with the technical and organizational editing is fast (forget your stories of "visual wave," he will cause your ears, lol)
by against the effects are quite manage galre
large defects are to me:
assignasition the sounds coming out, this range has a logic of stereo, mono sound to assign a style bass, c ki is still run, you must select a stereo out and panning left or would droite.il t easier to choose a single output numbered 1 to 8.
it is not posible to delete facilement.une part of the bank's in memory (bank's e-mu are very very good, arggghhh) and to leave that some facilties preset.pour overcome that and my working day ' is buying a 2eme.l trick is that you can put the two samplers on the same SCSI chain, chaqun can read the same zip on a rotating basis, claaaasse.
the management of a memory .... What is to have a memory of 128mb if you can not fill because the sampler is 255 preset limit a bank's been about 16 mb to 255 preset.
over the management of jazz hd zip is the same caliber, regardless of the suport it is limited to 100 banques.j 'have to redo my sound banks in order to fill a 2GB hard disk.
To summarize the sampler has some kinks to use very easy around, saw the price to have two is not necessarily a luxury, so if ...
banks of the e-mu is busted on the site of between 15 and 45 thomann

We enter the topic
ahhhhh ... a. sound slaps nothing to say
the effects we forget
ben dynamics it seems to me very very good
I put a 10 because j'adooooore the sound of this sampler
deep in the bass worthy of analog synth for me, and very clear in the acute, but do not count on a transparent restitution e-mu has a grain, which makes the legend of some sampler, right?
filters are very bone quality can be fun even simulate analog modeling with low and high pass filters etc. .... so if I did, lol

I started with a 32 esi basis, we can consider that I taf with this sampler from 99 ('tain a pass too quickly)
if I should change I'm not even sure to get a sound necessarily better.
I confess that I have not worked on other models, but when I go into the studio there's no bcp taf to do a slap on the direct yeeeeeaaaaaahhhhh:-i
Remember that in this most important zik the SON and not frills edition of memory or graphics rendering
okaz qualitprix of the report is unbeatable
the hard part is to chop a scsi cd drive
if I had to redo a choice in the same product line I would change nothing
otherwise I would turn to the very very big stuff of e-mu, always double, fetish brand ???!!
So I put 7 / 10 to 10/10 essemble and for his

Using easy with an operating system originally designed well ...
Creation of zones, tuning, setting: everything is done fairly
Quickly history of not getting lost in the technical ...

But some treatments are horribly long
(Several tens of minutes for larger operations) ...

The editions of the sounds is perhaps the weak point of Esi 4000:
No preview, so to manually find the Zero-Crossings (amplitude points close to 0) is a little galley ...
If you want to make complicated connections with the duties
Cut Copy and Paste, it takes too much time if you want to be really accurate ...
However, looping samples on a defined portion is
very convenient to save memory ..

The manual is well explained, but to have it in French,
it must rise early ... Better to know
chti a little English dedicated to electronic music

Transparency converters:
Sound E-Mu, not transparent
His punchy, aggressive limit, a little hard in the lower as in
treble - so for a little rhythmic compression and
of equalization not hurt ...
It's good that the Yankees ....
We forgive them a bit with the interest shown by the 19 types of filters to the machine ... Many experimental perspective
but if you are looking for a Lowpass analog sounding, it's not quite that ...
Another thing: The effects of the turbo option are of poor quality
Suddenly, around 3000 to buy a card that adds F
2 analog outputs, a digital I / O and dual processor
we will never use, that's still bad ...
To return to the dynamic
I find them quite clearly.
Note, crude as they are, they allow a lot of flexibility in compression, but personally
I think the record is not perfect.

I use a 4000 Turbo Esi for a year ...
It is a rather powerful sampler on the whole
Although the turbo option appears to be a nice afterthought scam ...
I tried a Akai S2000 and MPC2000 before making this choice
So, I do not regret it too, not knowing the high end and Akai models from Yamaha and Kurzweil ...