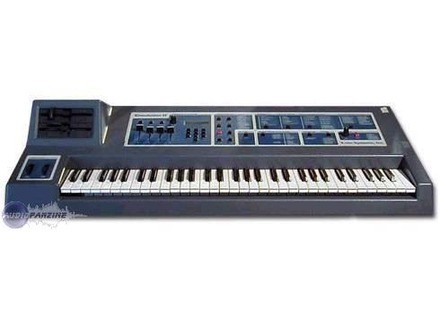 E-MU Emulator II
5
The Emulator II sampler is at the "keyboard" that the Yamaha DX7 synthesizer is "digital", that is the most sold in the world. United States it is common to see a child learn the piano on his father&#39;s old EII made available to her room, the keyboard is still running on stage (only to states that because there is out there where there are still parts: In France it is better to keep it at home, heating time limited, you never know).

Better born than its little brother the Emulator 1, but retains features such as redundant Z80 processor, micro controller DMA but it includes sampling 16Bits (then it will be the S1000 or the EIII to find that frequency). The Emulator II is a feat of technology. And like E-MU&#39;s understanding of history, sync between two EMU II was perfect.
And especially this time it combines the philosophy of sampler coupled with an analog synthesizer which makes the reference.
At a time when the machines are still synchronizing CV Gate, the EII is seems the best features: Midi, SMPTE, RS422 ... a luxury.

Considerably advanced for its time, the IIA had 8 independent analog outputs, a large memory (up to 1 MB) <p class="bbcode-offtopic"> Off topic: <span>it&#39;s</span> a <span>smile now</span> and ultra stable OS on disk set, plus a blue LCD screen with backlight for the stage or the darkness of the Studio. Once lit, the magic happens.

Beyond the sound aspect is its physical appearance will be remembered as such a woman to the morphology advantageous or exciting, the Emulator II has all of a woman, moreover, that one who has contradict me a ...

. Excuse me the word, this machine has my ass hell.
On stage you can not miss an EIII EII as an elsewhere that is more streamlined and deeper. The EII is an imposing army and gray colors, with the front panel cyan contrast gives this bike a warrior look. For the noise level is really the war ...
All Pro Studios at the time, post-production, broadcast, Composers BOF and New Wave group, or have an electro EII.
<p class="bbcode-offtopic"> Off <span>topic:</span> Even <span>the group "the Muscle" club Dorothée ... is to say. Claude, if you read us

Available in 1984 (turning point of the music of the 80 "both musical and technological) the Emulator II is proposed to base with 512 KB of RAM for the samples, a single floppy disk, and no hard disk. E -mu Systems has tried to market a Cheap with 256KB but it never emerged. Given the price of RAM and hard drives, the idea of ​​marketing a light version for musicians who already have Pro a full version seemed attractive. Good.

The Emulator II + the bank has 512 KB of memory plus sample, allowing the download of a Set of Samples in parallel to the first memory bank. This option is awesome on stage.
We can then switch from one to another and go on food samples during a game

Last EmuII model generation. It offers a hard disk
20 MB of origin and installed a second drive Floppy 3.5 ".
Offering and 46 sound banks to be stored in memory which is much faster than the floppy drive tradional.

Simple is difficult.
User manual uncertain in French, it will be the translation of the manuscript SP12 to find matches of Sampler of EII.
At the time the use of English was perhaps less democratized now, yet the handling was a breeze.

Sounds daunting, as the dynamic quality at the time and just like today where we try in vain to get the same seed as that time ...

It&#39;s a Lot, It&#39;s a Lot ... Master and Servant! (Depeche Mode)
Pamis legendary groups who used the Emulator II in the 80 ", Depeche Mode, Michael Jackson, Eurythmics and Genesis are probably the four emblems of E-mu at the time. (Our national Jean-Michel Jarre had in thrown his sights on the Fairlight 2x: ref. Zoolook and others even if EII is still available in studio)

The Emulator II and its development, has attracted all the musicians around the world for six years after the first production. The EIII most comprehensive but more expensive but has luiaussi attracted much less in quantity than the EII.
Then came the fashion of the rack with their dogma of the "transparent" as Akai and Kurzweil have been able to find a place.

But if you cross the road one day a Emulator II for sale and that it does no damage, and deep down you hear a voice that "Vieeens ...".
Get out your checkbook and a very modest cost today you do the most good.

30 of 32 people found this review helpful

zecorner's review (This content has been automatically translated from French)

E-MU Emulator II
5
Polyphony, 8
converters exceptional, never heard of!!
no effect, but an incredible analog edition!
700k is not much memory, and I think mine and doubled over in memory I believe ...
Audio outputs connections separrees 8, noon smpte ...
are of utility mac edition ..

Very simple to use, but very long ...

4 of 10 people found this review helpful