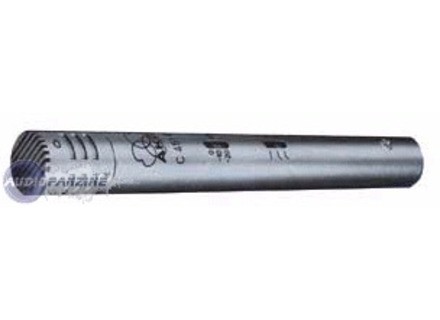 Product replaced by the AKG C451 B.

AKG C 451 C
5
I used the AKG C 451 back in 2005 in to 2006. This microphone is no longer being made, it actually got discontinued not long after it was circulated. This microphone came out long before I had my hands on it though. The C 451 is some what affordable depending on what your budget is, but this could be one of the best all around microphones that was out. You could use the C 451 on almost any instrument in live or in a recording setting and get a very natural sound. I was very upset that it was discontinued, because I purchased mine used in 2006 and in early 2006 it got damaged and was never the same again. Or maybe it was damaged to a certain extent before I purchased it, because I only dropped it a few times while moving gear around and it made this horrible hissing noise and it would “pop” (like it had a short or something). I tried to see if it could get fixed but had no luck and AKG wasn’t much help with trying to fix it. I even purchase another AKG microphone back in 2006 thinking that it would be similar to this one because it had similar specs, but it was not as good.

The best thing about the AKG C 451 is that the sound is very good, and its very good no matter what instrument you are using or what your pitch range is as a vocalist. This microphone was very versatile and the tone was second to none. I have not really liked many other AKG microphones that have came out over the last 10 years, I wish they would remake this microphone. I have used the C451 and the C451E, that was back in the 90’s, they are both very similar. That was the reason that I went back and found this microphone in 2005.

AKG C 451 C
condenser microphone, 12 copies purchased between 1970 and 1980, used in all types of classical music, organ, clavichord through symphony orchestras, with or without vocals, choirs and all types of music imaginable room . Phantom power between 9.5 V and 52 V, handy at the time when the power Boards were not standardized at 48 V.
Keep at all costs when you have the chance to own.

Dear (originally) is an investment that I have never regretted. I still use today, along with other more specific microphones. They all still work perfectly. Many recordings made with these microphones had distinctions in terms of the sound ...

Pierre musy's review (This content has been automatically translated from French)

AKG C 451 C
5
You can record everything with this microphone. It is a claret and a great precision and performs as well on almost all types of voices, the acoustic guitars, also on lctriques as reinforcements for the brightness of the rope on Wind instruments that do not too dgagent sound pressure level (cap sensitive), on ropes, a snare and also overhead on a battery. In conclusion, the 451 (the 451-BC-EB) are microphones do everything but not the cheap microphones because of their high quality trs.

I use this mic for over 17 years and I achte whenever I get the chance. I am in love with his tone and finesse. Sometimes it is very practical for example when my U 87 is a little soft ... As you can see, my 451 battery never leaves me when I'm recording.
PS: Shoeps, Sennheiser and Neumann microphones are also good ...