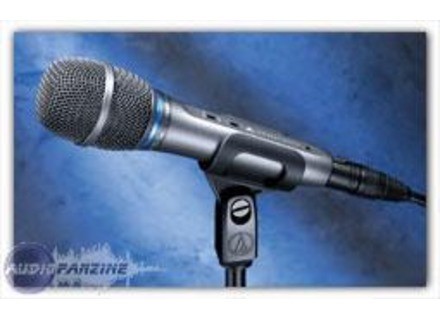 View all offers for Audio-Technica AE5400 »

Audio-Technica AE5400
5
We experienced approximately 3-5db more gain before feedback from the AE5400, in comparison to both the SM58 and the Neumann KMS 104.

The 350-500 Hz dib it has is very useful, because it's a frequency the live mixer always pulls anyway and it takes away lower mid mud from the sound.

The high end is very articulate and clear. It can sometimes be a little bright for a PA, but taking a db or 2 off at the top, should help enough to end up with a finished, polished, close to Studio sound.

We were all very impressed with how much authority and unbelievable performance could come across from the singers to the audience. You never realize how much can get lost on the way from mouth through mic, mixer, speakers to ears...and making the first element in the chain better, definitely improved the experience, our audiences have had, since we used this mic.

Very happy with it. Clear contender in the Neumann range, with a better rejection, slightly less openness, but more mid and high end resolution than its Shure counterpart.

If you do pop, are a singer songwriter, a cleaner Indie singer or even a shouter in a metal band....this mic has worked its wonders and everybody has always asked what this mic is...they couldn't believe the quality.
Did you find this review helpful?yesno
»

Audio-Technica AE5400
4
*Microphones are very subjective. Some microphones that work for some brilliantly may be disastrous on others. It is therefore important to understand the context in which this review is written and take it with a grain of salt, like all reviews on microphones should be treated.*

The Audio-Technica AE5400 is a handheld condenser microphone tailored specifically for live use. Its claim to fame lies in its element: the very same as the vaunted AT4050. It's essentially a narrower cardioid AT4050 for live use. You may be wondering how I can say something this lofty. Live microphones are by their very nature less detailed than studio microphones, but more forgiving. I'm not one to judge a microphone based solely on specs; one has to try it first. However, let's look at a few of the specifications of the AE5400 compared to the AT4050's:

What's going on here? Well, having used both, they're utterly different microphones. Don't fool yourself by thinking the AE5400 is better than the AT4050 "except for multiple patterns." The AE5400 is a remarkable live microphone and it IS incredibly possibly to get incredible studio vocals out of them, but it's not going to replace the AT4050. The AE5400 has a nice coloring to it that, if you look at the frequency curve, is designed to reduce sibilance, and emphasize presence and warmth.

Personally, I prefer the AE3300. This microphone, for me at least, is very good live, but it comes across as just another premium live microphone to me. Unlike the AE3300, which seems to have enough "anger" in its sound for me to absolutely love, the AE5400 is sadly, a little bit dull-sounding, especially when compared to the venerated Neumann KMS 105 it's supposed to compete with. However, its switches and features make it a heck more versatile, so don't toss the idea of the AE5400 before you give it a go yourself!
Did you find this review helpful?yesno
»

- What technology? (Electret, condenser ...)
capacitor.
This is the same electronics as the 4050 ... I have already elsewhere.

- How long have you use it?
I found on E ... nine in the final stock in a shop ... E one week after having requested an opinion on the microphone ...
- What is the particular feature you like best and least?
I had the OCCAZ compare a KMS105 (hyper cardio), the sound is much more natural and easier ... grate ... It's a shame that there is no marked Neuman above for customers.

- Have you tried many other models before acqurir?
I begin to have a microphone not dgueu park and was looking for a handheld microphone, static, an alternative KMS 105. I sincerely believe that I have found!

- How do you report qualitprix?
I pay almost 2 times cheaper than its price in France.
Its price-quality ratio is unbeatable even in France.

- With the exprience, you do again this choice ...?
A 2nd tempt me, but not my priorities of the moment ...
Did you find this review helpful?yesno
»