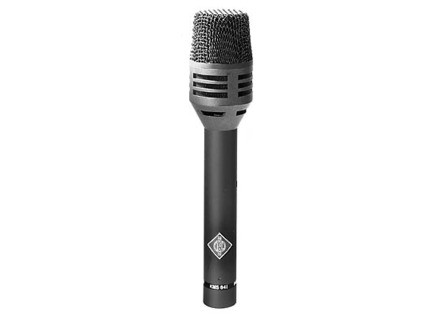 Bernard Ancèze's review (This content has been automatically translated from French)" This is a microphone for voice. Relate the cons: Mechanical and acoustic ractions"

This is a microphone for voice. Cons relating to ractions: Mechanical and acoustic.

This mic is quite rare today and is worth the curiosity.
It is quite Lger, nice design dat a bit.
Proximity to a large and it is not inappropriate to intressant eaters microphones. Between 5cm and 20cm he unveils a well Dfine, beautiful transition, a very-very good intelligibility and a very well proximity effect masters. Treatment against Larsen will be more effective on KMS150.
Scenes on acoustic or orchestral mass is not too large and o one can "make" the sound without taking itself too the head with returns and Larsen is a real gem of his, Clearly, stamp body, dtail. Behind you can compress without fear runs a low-medium rather cumbersome and often irraliste or any acidic, this is rare. Even with a compressor nag a bit, the sound retains its elegance.
It is also a very good micro-studio radio broadcast, intelligibility transparency, sensitivity average.
It is not very sensitive (5mv/Pa) 150 ohms. I think that is the least sensitive of the series KM.
He called KMS84, and resembles the KM84 by the finesse and elegance, but it does not sound like it. Without the low-cut is a bit the same low-medium rather sober and well posed. The presence of medium rather more acute and may be even sweeter.
Studio and in proximity dvissant the grid is quite nice because of the proximity effect is well teachers (one of my better sense).
This mastery of the effect of proximity on the mic is quite singulire. Up to 5cm is working, filter, and then all of a sudden, in the millimeter prs, has become monstrous ds is approached less than 5cm.
Besides voice:
- Difficult very difficult on the piano, acoustic guitar and the quartet.
- OH, it is highly facilitated easier than normal KM84, not prettier. It's hard to make prettier than the KM84 OH, but if I do not have time to finesse .. Come on, hop kmS84.
- Return type guitar amp Mesa boogie-clear sound.
- I do not have enough exprience on other instruments to speak of.