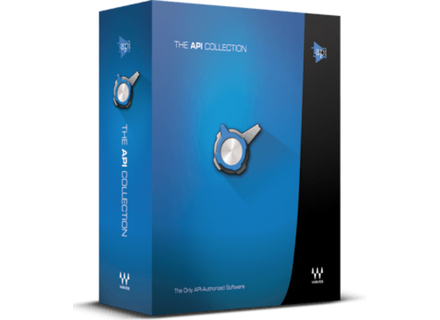 The API Collection Native, Software channel strip from Waves in the API series.

I have a Mac Pro 2.66 Quad Core with 8 GB of ram and a White Macbook with Intel Core 2 Duo Cpu with 4 GB of Ram.
The installation is really easy and the the manual is well written.
These plugins works like a charm, never had a problem in more than 2 years of use. However I’m still waiting for the release of the 64 Bit Compatible versions.

In the process of modelling legendary audio gear, Waves in conjunction with API trying to recreate the sonic characteristics of some of their hardware.

They recreate 3 EQ and 1 Compressor

Featuring four overlapped EQ bands, the API 550B is invaluable as both a problem solver and a sweetening device. With 7 switchable filter frequencies spanning up to 5 octaves per band, the 550B’s “Proportional Q” automatically widens the filter bandwidth at minimal settings and narrows it at higher settings. It even lets you undo previous processing, affect or even reverse tonal modifications.

Modeled on the late 1960's legend, the API 550A EQ provides reciprocal equalization at 15 points in 5 steps of boost divided into three overlapping ranges. The high and low frequency ranges are individually selectable as either peaking or shelving, and a band-pass filter can be inserted independently of all other settings.

Based on the 1967 classic, the API 560 10-Band Graphic Equalizer features precision filtering and high headroom, ideal for signal enhancement and room tuning. The API 560's curve shaping potential is unmatched, while API's unique "Proportional Q" design intuitively widens the filter bandwidth at lower boost/cut levels and narrows it at higher settings. And since boost and cut characteristics are identical, previous actions can be easily undone. For precision equalization with unmatched versatility, turn to the EQ heard on top recordings for decades: the API 560.

The API 2500 is a versatile dynamics processor that lets you shape the punch and tone of mixes with absolute accuracy. Its dual channel design lets the 2500 also function as two separate mono channels via a single compression setting. Using auto-makeup gain, you can adjust Threshold or Ratio while automatically maintaining a constant output level.

I’ve used these extensively on my projects and in a recording studio in the last 2 years and always with great results. The Compressor it’s my favourite on drum and buss sections. It can retain a lot of punch without losing clarity.
I’ve also had the chance to try the 550b EQ with its real counterpart and in a “blind” test with some other engineers chances to catch the original and the plugin were really low, they really doing a great job recreating these plugins, and given the fact that the price dropped a lot in the last years, you will have fantastic mixing tools at an incredible price.
My advice however, if you can afford it, to buy the Studio Classics bundle, you will need not

Waves The API Collection Native
5
This software installed with no problems. I didn't have any compatibility issues. The configuration is very simple - just run the installer and click next! It's very easy to get up and running. The manual is very good for this software, and worth actually reading through. Things are explained in plain English, and there are many functions that you probably wouldn't know existed if you didn't take the time to go through the manual.

My computer is a Dell that has an Intel processor, 2 GB of RAM, windows XP and Cubase. The software works perfectly with this kind of a computer. Most of these plug-ins in the bundle use a lot of CPU, so buyer beware on that end. You will want to have a higher end processor if you hope to use more than a few of these at a time. However, the sound quality you get absolutely makes up for the heavy CPU toll. As for stability, I didn't notice any crashes or anything caused by the API plug-ins, so they seem to be very stable.

I have had this for about 6 months. I will tell you now that this is by far the best thing in software you can find to emulate the sounds of an API console. The EQ and compression sound so similar, it's really amazing they were able to pull it off so well. If you have used an API console, you know what they can do to your mix. If you don't have the thousands of dollars or space to get one of your own, then this is the next best thing. Waves also released new presets by Jack Joseph Puig for this collection, so there is an added bonus. I have used real API consoles and many other plug-ins that serve the same function. This is an amazing value if you wish you get the API sound in your own set up. I would definitely buy it again, no regrets here.

Viguier's review (This content has been automatically translated from French)

Waves The API Collection Native
5
So to all that is installed, incompatibilities, resources and all that li hardware, I have no ide, I visited a studio that had the amateur pluggins following their BIG PC . I have no ide concerns they may have encountered during installation.

I put 7 pnaliser not to the overall opinion ...

APRS be falls under the spell of Wave Bus Compressor SSL Bus Comp, I came at the same studio amateur playing with the plugs on the qualiseurs API.

Same, same slap. We can sculpt the sound, but also the qualiser amne a cot "Iron", or solid vintage but the sound, not easy to explain.
This is close to my table equalos Amek / TAC but "harder", more "massive".

You can easily spend 20 minutes fiddling custom settings of the plug, but it still remains in all musical, as if silent before a real table.

The bow and I have to say Bravo, I did not plug a "native" one day be as good. I must say that I have to plug this prfr qualos Waves SSL but it is not the same thing mulate sense either.

I must be more of a cole "vintage" and seeking his "organic", this plug fits well the spirit ...

Sebranc's review (This content has been automatically translated from French)

Waves The API Collection Native
5
As for installation, it is clear that the stories are a bit cl Ilok chi ... And rcuprer licenses on the Waves site requires some patience. Apart from a, no incompatibility Cubase studio recognized immediately plug-ins.

2 months of use: say anything, it's clean. I can not make comparisons with other plug-ins such as DSU or URS because not essays. In any case, this collection is really a great job: a musical rest even when you push the rglages and provides I do not know what indfinissable some translate as "heat". The compressor is a bit dlicat take control and I do not always understand the signs of VU meters and LED clipping: clip a few times without the VU meters are in red. But that's just history to seek the small bte.

Did you find this review helpful?yesno
»
Read the 6 user reviews on the Waves The API Collection Native »

Published on 05/28/16
Today only, Waves offers special discounts on their Trueverb and Greg Wells PianoCentric plugins as well as API Collection bundle.

See all 29 photos of Waves The API Collection Native »