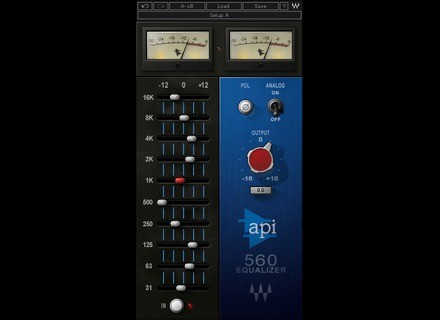 API 560, Software graphic EQ from Waves in the API series.

Waves API 560
4
This is yet another EQ that Waves has made. This time, it's modeled after the famous graphic equalizer of the time. There are ten different EQ bands on this ranging from 31 Hz to 16KHz. On top of that, there is a Q control that can either widen or narrow the overall filter band.

The moment people see this, they're going to mention its versatility. Yes, it's more versatile than the other ones. However, the other ones were more parametric EQs where as this is a graphic EQ. I find that this can work awesome for boosting a guitar signal into overdrive by applying it before the amp modeler, but it doesn't have that vintage EQ character that I enjoyed from the other ones.

In one way, this EQ is a bit more versatile simply because it's a 10 band graphic EQ. On the other hand, I find myself using the API 550 series more because they're closer to parametric EQs, and they tend to be better suited for guitars and the such. However, this is still a great EQ, and I recommend you check it out if you ever get the chance. Just be sure not to pirate these as Waves loses enough money as it is thanks to the pirates out there.
Did you find this review helpful?yesno
»

Waves API 560
5
The Waves Ltd. API 560 is a graphic equalizer plug-in that is part of the Waves API Collection of plug-ins. I don't think it's available for purchase on it's own, so you'll need either the aforementioned bundle or the full Waves Complete bundle to acquire this plug-in. Installing the plug-in should be really simple, as I had no issues at all installing any of the Waves API plug-ins and I don't believe that others will have problems as long as your system is sufficient and compatible. The interface of the plug-in is really simple, as it's just a software version of the ten band 500 series API 560 hardware equalizer. Even if you've never used the original hardware 560 before, it's just a simple graphic EQ and should be self explanatory regardless of your level of expertise. The plug-in also has an overall output leveler in addition to the ten bands of sliders. A manual shouldn't be necessary, but I haven't seen it so I can't speak to it's make up.

I'm currently running the Waves Ltd. API 560 plug-in at home on my Mac Book Pro and with Pro Tools LE 8. The computer has a 2.2 Ghz Intel Core 2 Duo processor and 4 GB of RAM, while I'm running Pro Tools LE 8 with a Digi 002R audio interface and I'm monitoring with a set of Adam A7's. This plug-in hasn't been taking up too much of my processing power within this configuration, and it's also worth noting that I've used it on a Pro Tools HD system without problems as well. If you're looking to get any Waves plug-ins, it should be safe to say that you already know you'll need a sufficient system to run them on...

The Waves Ltd. API 560 is a nice little graphic EQ plug-in and is one that can definitely come in quite useful on a daily basis. It's perfect for doing a quick EQ job if you're looking just to cut or boost right at one of the given frequencies. It doesn't sound as good or clean as a real API 560, but it's pretty close for a plug-in version. If you're interested in some new EQ plug-ins and/or this one specifically, I'd definitely recommend looking into the entire Waves API Collection.
Did you find this review helpful?yesno
»