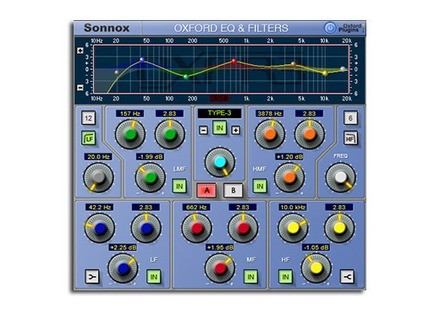 Sonnox Oxford EQ
3
Easy setup. No problems getting mine to work in Cubase 5. Sonnox stuff is at a pretty high level of function. They aren't selling toys.

My friend recommended this plugin. I had been asking if he knew of a good dedicated and light EQ. I was previously using a Waves plug for EQ and didn't like it much. Sounded dead to me. The Oxford EQ first of all, is very light on CPU. I won't debate that. I almost can't tell it's on. And just from looking at I can tell it's not going to destroy my track's quality. So for that it gets points. I like transparency. However, this is a very intimidating EQ. First of all, there's nothing analog about this plugin. It doesn't "respond" or sound analog at all. It actually sounds really hi-fi. And the controls aren't like anything I've ever seen on an analog compressor. They're pretty involved, and from the get go I was a little lost to be honest. The manual didn't help much. I spent a few hours trying to get the hang of it and just couldn't. Maybe I'm used to certain EQ styles but this one wasn't for me. I'm going back to Waves or maybe URS.

I will say I can't knock the sound quality. When I got it dialed in, it sounded good. But the controls ended up giving me a headache. I haven't tried other Sonnox plugs but I want to soon. I'm curious what else they have even though this one wasn't really my style. If you want to try something different or want something fresh...maybe a challenge, then this is a cool vst. Obviously the quality is there. Sonnox just has a weird take on things. I still recommend.

Sonnox Oxford EQ
5
The Sony Oxford EQ native was easy to install as I had no compatibility issues with my computer and setup. The configuration of the plug-in is easy to follow and just about as straight forward as a parametric EQ can get. It has five bands and controls for gain, frequency, and Q for each. It also has a nice graph that can be controlled to zoom in on exactly what you want to do. I don't have a manual for this but it was easy enough to install and figure out that I didn't need one, but can't say how thorough it is.

I am running the Sony Oxford EQ on a Mac Book Pro with a 2.2 Ghz Intel Core 2 Duo processor and 4 GB of RAM. I am using it in Pro Tools LE 7.4 and a Digi002R audio interface. I have never had any problems running this plug-in with this configuration as it has always run smoothly. I've been able to run up for four or five of these at once on different tracks. It has always been stable with this configuration and have had no issues with it whatsoever.

I've been using the Sony Oxford EQ about a year and in that time it has become one of my favorite EQ plug-ins because of the high sound quality and the ease of use. The sound is clean and it won't color your tone beyond what you set it to do. This is definitley better sounding and more versatile than Digidesign EQ III, but of course will cost you much more because EQ III is free with Pro Tools and Oxford is not. The price is a little expensive I think, but it is definitley a great EQ plug-in just as capable as any EQ plug-in out there.
Did you find this review helpful?yesno
»

DCSOUNDSTUDIO's review (This content has been automatically translated from French)

Sonnox Oxford EQ
5
What to say after trying so many plugs, if not it's probably one of the best eq market software!
Did you find this review helpful?yesno
»

DCSOUNDSTUDIO's review (This content has been automatically translated from French)

Sonnox Oxford EQ
5
Say that after trying so many plugs, except that it is without doubt one of the best software eq's market!

Published on 08/30/12
Universal Audio (UA) announces the release of the Sonnox Oxford EQ plug-in for the UAD-2 Powered Plug-Ins platform.

Listen to the 11 audio files about Sonnox Oxford EQ »