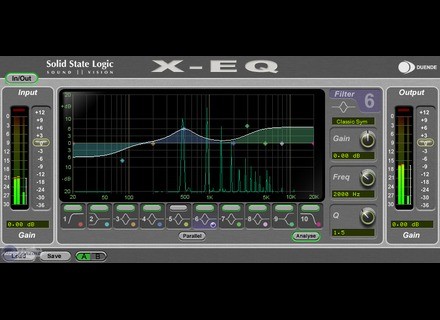 Product replaced by the SSL X-EQ 2.

SSL X-EQ
4
The SSL X EQ was easy to install as I had no compatibility issues with my computer and setup. The configuration of the plug-in is easy to follow and just about as straight forward as a parametric EQ can get. It has five bands and controls for gain, frequency, and Q for each. It also has a nice graph that can be controlled to zoom in on exactly what you want to do. I don't have a manual for this but it was easy enough to install and figure out that I didn't need one, but can't say how thorough it is.

I am running the SSL X EQ on a Mac Book Pro with a 2.2 Ghz Intel Core 2 Duo processor and 4 GB of RAM. I am using it in Pro Tools LE 9 and a Digi002R audio interface. I have never had any problems running this plug-in with this configuration as it has always run smoothly. I've been able to run up for four or five of these at once on different tracks. It has always been stable with this configuration and have had no issues with it whatsoever.

I've been using the SSL X EQ about a year and in that time it has become one of my favorite EQ plug-ins because of the high sound quality and the ease of use. The sound is clean and it won't color your tone beyond what you set it to do. This is definitely better sounding and more versatile than Digidesign EQ III, but of course will cost you much more because EQ III is free with Pro Tools and SSL X EQ is not. The price is a little expensive I think, but it is definitely a great EQ plug-in just as capable as any EQ plug-in out there. I compare this to the eq bundle that comes with pro tools. But this can be used with a wide number of DAW’s.

SSL X-EQ
5
The SSL X-EQ is an equalizer plug-in consisting of 10 bands.  I wasn't involved with the installation process of the plug-in, as the system that I used it on already had it installed.  This plug-in runs with SSL's Duende DSP card and configuration.  However, the interface of the software is easy enough to figure out as it only took me a small amount of usage to fully grasp the plug-in.  Each of the ten bands can be controlled using the same parameters of gain, Q, and frequency.  It's also stereo metering for both input and output.  In addition to EQing, you've got the ability to analyze your signal, which is probably the best feature of the plug-in as it allows you to view and zero in on the adjustments you are making.  I've never seen a manual for the software so I can't say anything about how well put together it is or not.

The system I have used the SSL X-EQ plug-in on runs with Pro Tools HD, including a Digidesign 192 I/O interface and Apogee converters.  I'm not sure on the exact specs on the computer, but it is a Apple G5 with a good amount of power.  Since the plug-in runs with an external DSP card, those running this plug-in won't have issues running the plug-in no matter what system they are running it on.  I'm able to run X-EQ without any issues whatsoever within this configuration, as it has enough power to handle running multiple instances of the plug-in within a single session without a problem.  I can't speak to how well it would run on a Pro Tools LE system or something comparable, but if you have an HD system, like with most plug-ins you won't have any problems here.  This being said, I think it will run fine for anyone because of the Duende DSP external card.

Overall, SSL X-EQ is a very impressive plug-in in my opinion.  Not only is the EQ incredibly clean sounding, but being able to analyze your signal in real time is one of the most useful features I've seen on a plug-in.  It makes it so easy to see the exact frequencies that might need more or less and I find it makes it easier than ever.  While it isn't cheap to buy the Duende DSP card, for those looking for access to a top notch line of plug-ins that are some of the best of its kind, it is definitely worth looking into.

karlhelly's review (This content has been automatically translated from French)" EXELENTISSIME"

what about a hand full transparency when it goes back to the acute severe and medium remains intact
he just do everything so clean or beautify without being aggressive perfect for mix or pre mastering, but for pre mastering I use that to clean to make it more attractive flow diagram which is unlikely to be much less transparent than the x eq but a sweetness I look I get it that the beyond.
In any case it's ssl and we just trust them
Did you find this review helpful?yesno
»