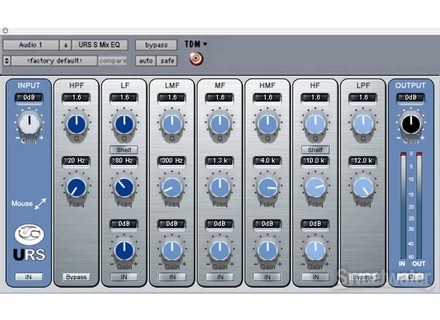 URS S Series Mix EQ
5
The URS S Series Mix EQ is one of two plug-ins in the S Series bundle of EQ plug-ins. It's basically a more in depth version of the original S Series plug-in. The plug-in is made up of five bands as well as a high and low pass filter. Each of the five main bands have parameters for frequency, gain, and Q (band width). It also gives you control over both the input and output levels. Between the five bands and the high and low pass filters, there's a ton that you can do right in the box here with this one plug-in. It's labeled as a mix EQ for a reason, as it's definitely best suited for mixing and getting in depth with sculpting your sounds. It's easy to use if you know how to use a parametric EQ, so a manual isn't really necessary.

I'm currently running the URS S Series Mix EQ in Pro Tools LE 8 on my home system. This has been an adequate system for running multiple instances of this plug-in at a time without issues. My system specifically includes a Mac Book Pro computer with a 2.2 Ghz Intel Core 2 Duo processor and 4 GB of RAM and a Digi 002R audio interface to run Pro Tools. It's always hard to say how well a plug-in will run on a given system, so definitely give the trial version a whirl before buying just to be sure.

I love the in depth control available with the URS S Series Mix EQ, as between all the bands on here you can pretty much do everything you want to in terms of using EQ during mixing (or otherwise if wanted). If you're doing more simple EQ moves it's probably best to use the S Series EQ that is also included with this plug-in, but for more in depth sculpting this one is the way to go. It's really got a clean sound as it doesn't really bring it's own color to the table, and I mean that in a good way. URS has been seemingly dropping the prices of their plug-ins, so the URS S Series Mix EQ is available at an incredible price! Definitely an awesome EQ plug-in to have as an in the box mixing option...
Did you find this review helpful?yesno
»