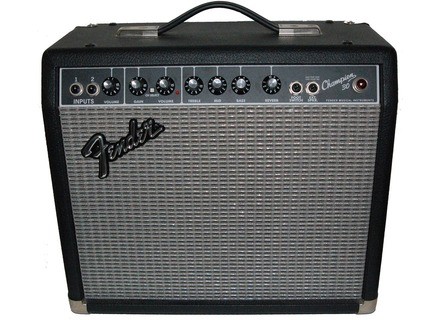 Product replaced by the Fender Champion 300.

Fender Champion 30
4
I purchased this amplifier new for about $250. Purchased at was then Mars Music (since gone out of business at that location). I was looking for a step up from my tiny Crate practice amp. I had joined a basement band and needed something bigger and more versitile.

The amp was perfect for me at the time. Small and light enough to easilly cary around, yet loud enough to hear over our drummer in the basement.

The clean channel has a nice Fender tone, and the distortion didn't sound horrible either.

It doesn't come with a footswitch, but I bought a Roland switch for about $20 that works fine.

Having two inputs in nice too.

The amp began to distort even the clean channel when turned up more than 5 or so. The reverb was pretty weak.

I have heard horror stories about these amps suddenly going dead. I've never had that problem at all. I've owned it for 2 years now and the only problem it has is that the 1st input connection is going bad - I have to wiggle the cord around a bit. I'm sure this would be a fairly cheap repair, but I've just been too lazy to have it worked on.

The bottom line is that this is a pretty good step up from those 10-15 watt practice amps that every new guiatrist (including me) seems to aquire. It'll hold it's own in a basement, but that's about the extent of it's gigging ability.

The model I have has been replaced with one with some digital effects built in - I think it's called the Champion 30 DSP.

I really don't care for it at all

sound wasn't clear at loud volumes, very muddy sounding, in fact i will never buy anything fender ever again.

Never go with fender anything, why they are popular, i'll never know. thier amps, guitars and equipment are all sub-par- stay clear of fender junk.

Fender Champion 30
4
I bought the amp for around $220 at a independant music store (support local music scene).I needed a powerful but compact box to sit in with that could also double for playing at a yard party.

The amp has a great bark and a impressive bite. the two channels makes it so versitale and the dual input for normal and hotter feeds gives it so much range. having such a big selection of built in effects can eliminate the chore of more cable, another add on pedal and one more thing too carry to and from the truck. Its solid construction can handle being moved and bumped.I also find they made the cabinet with a large access to the back i can store a couple sets of strings, a electronic tuner, handtowel and wax to keep with it.

i havent had any failures or signs of poor workmanship that many others claimed.the main fault i find myself commmiting is turning up the gain and effects levels too much in attempts to bring out more of the sounds, just because it can pump it out.Wish it had a headphone jack, surpised it didnt.

it is light enough for a younger player or hobbyist to take with them to jams and houses, but stout enough to handle being bumped and stand its own space when played thru. the face and dials are easy to see and use, too bad they didnt put a headphone jack in it (huge oversite or market ploy to get a buyer to upgrade for headphone play).

given the versitality, rugged construction,the big bark and big bite it makes, and even though the multi inputs are always a luxery, its the sound and wide selection of built in effects that makes it well worth having for low $200's jam amp. any one who would need more than this puppy delivers shouldnt be with the 30's anyway.

this amp sounds ok but i keep getting static on the clean channel and the input is loose.

i had it only for 2 months and it broke. i turned it on and nothing happened.i tried a different outlet and same thing. i returned it to the dealer and didnt get a new amp for another 3 months. the new one i got was just as bad as the first. this is by far the worst amp ever.

the input potz and reverb potz fell off the circuit board. the power chord supply input is also loose.

please dont judge this amp by just my review , it might have been just a bad amp , but if you really want a good amp for 200 bucks then go buy a peavey . theyre reliable and built like a tank .

This review was originally published on http://www.musicgearreview.com
Did you find this review helpful?yesno
»
Read the 12 user reviews on the Fender Champion 30 »

Fender Champion 30 manuals and other files