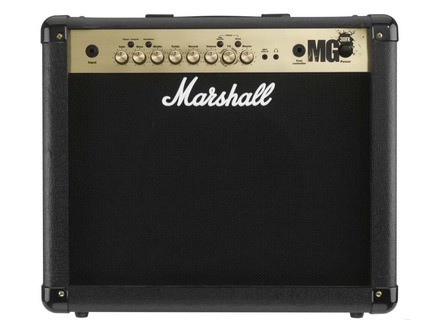 Marshall MG30FX [2009-2011]
3
This is Marshall attempt at the introductory amps for the beginner or low budget guitar players. Along with the reverb in the the amp it has several other effects such as Chorus, Phaser, Flanger, Delay. For the quiet player it has a headphone input so if you desire to play at home quietly or in your office this is a great feature.

The tone from this amp isn't that bad for being a solid state amp. It has 4 channels and all are very usable in the basic functions. This is an all in one amp for a beginner guitar player. Any one who has spent any time with a tube amp will not go for this other than to have as a practice unit for silence or office use. The crunch channel will get you a great classic rock tone. Trying using a Gibson Les Paul or SG and dial down the gain for some good Led Zeppelin tone or Ac/Dc crunch.

The over drive channel is excellent for modern rock and will sound good with any guitar used with humbucker pickup.

At the new price of about $200 it isn't that bad of a buy. If you are looking for a good amp that you don't have to worry about and just need for practicing or silent playing and you need that Marshall tone then this is a good amp for those purposes. This isn't going to go on stage anywhere or be good for recording, but if you need simplicity in a practice amp then this is a great amp for that. It has a good enough tone for getting your chops down or feeling out the neck of the guitar. I would recommend this to any Marshall fan looking for a solid practice amp.
Did you find this review helpful?yesno
»

I play mostly rock metal dessu it sounds very good I use a clean sound with a boss mt2 I like the digital reverb and delay but a little less other fact I never use because it's hard to find the correct setting for the effect since there is only one knob for chorus, phaser, flanger and Deley
I use it always clear sound with or without the boss mt2 and sometimes CRUCH
it sounds better in crunch and overdrive clear that in 1 and 2 that I find a little "dirty"

the default: the back is closed suddenly we do not store just the power cable is a bit short

Marshall MG30FX [2009-2011]
2
The series of entry-Marshall has been continuously updated since its appearance. On its website and in the press, we never stopped telling us that Marshall had done his homework and delivered the first series MG-sounding satisfactorily. This intrigued me and I dug up one for a test.

Approach
The craft, in terms of its production remains true to its reputation. Vinyl plastic input prices, pediment plastic imitation aluminum adjustment knobs plastic knobs and faux buttons Faux cheap knobs ... already creaking on the amp test store. it sucks, and in the tradition of his ancestors. The onboard effects are themselves a good point.

Apart from the problem of cracking of knobs, I also noticed that the mechanics of them (aka touch) settings were not in what may be called good. It is possible to switch from clean to crunch or distortion through the pimples quite enlightened practices. The amp is single channel tested, shows the shortcomings of the architecture, but alas, no benefits.

There's the best
Frankly, compared to the previously tested series of MG's, this series actually sounds better. I will, however, more measured than the press.

The clean has never been a default on mg and always allowed to do its job. Here too, we have a clean which falls within the normal range of marshals cleans without the verve or the lives of older brothers of the mark, but that Sort this out relatively well.

The crunch is significantly better than previously, with a more harmonious whole, but beware of the used guitar and amp settings. Indeed, the treble still sounded, regardless of the mode (crunch or distortion), offensive as soon as we wanted to push them a bit and ruining the sound. It will be economical and pray that your instrument is no shortage of frequencies in this spectrum.

Mode distortion was mushy and a bit exaggerated, I did not like and did not try to enter it in depth.

Similarly, I would not see the eq as a tool for sculpting sound, but as a tow truck accessory. I could not greatly change the outcome with them, except if I was in extreme positions. Some might say it's a default. I say it's common for marshall and quite realistic compared to other heads, called "reference".

Regarding the dynamics, the receiver for a single channel, are few. It's better than before, but it is still somewhat dependent on its setting, and we feel that a compressor to take you somewhere where you do not necessarily choose to go. I also found a very low tendency to cheat in the crunch, not making all the nuances of what I wanted to express. However, the amp is fun to use. There was more frustration to be sure of having been had. There's fishing, a semblance of emotion and cleans cut property. So all you need to have fun during rehearsals. But more experienced users who are a good amp to avoid, probably.

Regarding volume, the amp gives off a lot, for a 30W transistor is very honorable. But the cab and the hp's were unable to follow the big climbs volume.

The effects were, however, well modularized and could effectively remove the signal to give an objective assessment of sound. it was quite good and avoid having to pay the pedals at first.

More recommended before, the new MG series I do not completely convinced. Sounds took the stamp, but the manufacturing quality remains flush with daisies. Not to mention the fact that kills. 395 Chf. I Extension of 110 balls and I already find the first good amp sounds without any shops equivalence with this amp. Without forgetting the Tech21 Trademark 30, less known, less powerful, just as expensive but much better fucking from every angle (sound quality) that mg. The presence also of low cost tube amps like the right markets bugera v22 is also more competition for mg, which is struggling to take its place.

4 of 9 people found this review helpful

ElJulo's review (This content has been automatically translated from French)" Hmm ..."

The configuration could not be easier ..
We obtain easily the sound you want so the possibilities are limited.
The manual is quite clear indeed. So

sound as pleasant and without hesitating the crunch sound. Frankly very nice for this price point is the strong point of this amp!
The rest .. it sounds way but at this price it's normal.

As well tell you right now, this low-end Marshall amp is very nice to play at home without taking the head and not necessarily looking for good sound. The effects are correct but too cold for my taste.
If you are new (only), you play the Rock and want an amp signed Marshall you can take it.

I use it for over a month and I admit I made a mistake by taking it. I rushed and I regret it a bit. I think only 200 euros you can have better in competition.
THE crunch sound is nice so it saves a little while! Marshall is for me the best brand amp .. But the bottom line of AC is not worth the time. You know everything! If you still want to take it, try it before.