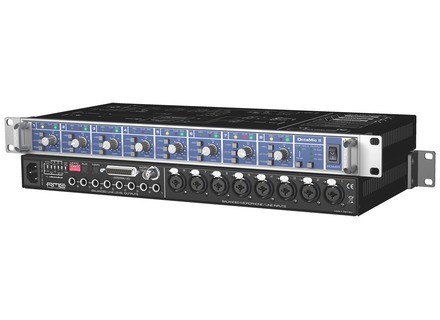 RME Audio OctaMic II
5
Rackmount Version 8 separate tracks mic / line with on / off buttons 48v/coupe High Low cut for each track.
Input on the back and on the front setting with very specific knobs, solid and a gauge on each track to control the level with green LED / orange / red

Easy to use, very powerful converter, sober, faithful and natural. Synchronization with the ufx Fireface is the simplest way.
Manual clear in all languages. Not even need to use it. The synchronization is done alone.

The preamps are really good and it is at this level that RME is very strong. RME is more expensive but the quality is. I've had it for 10 years before: Tascam 1641 (value for money), various soundcards maudio, Alesis, Korg D3200 Converter ... preamp and RME are really a higher level.
Its transparent

It's expensive but it's worth it. It's true, it's solid, it's accurate. So we must know what we want. Value combined with the rest of the equipment needed to get 16 or 24 tracks of all budget prices are high.

I used it for 2 or 3 years before I split because I had no more use.
no signs of aging in the meantime.
a very good investment.

Oliviercool's review (This content has been automatically translated from French)"No ADAT, argl :-( (("

- Signal - fabulous noise: 130 dB on analog outputs (without intervention of the converter) and 110 dB maximum in case the sound is digitized and released in ADAT or especially in AES / EBU

On each channel there are:
- Input Combo XLR - TRS
- Output TRS
- Digital output via ADAT (8 channels in, 24-bit 96 KHz ADAT S / MUX)
- Digital output via AES / EBU (via connector D-SUB 25 pin, certainly Tascam pinout)
- Gain adjustment
- Enabling power fantom 48V
- Activation of a high-pass
- Activating a phase inverter
- LED power supply fantom
- LED indicating that a signal between
- LED indicating that the signal exceeds 0dB (with a margin of 2 dB + with a function that flashes to indicate a time that was exceeded 0 dB)

For all of the apparatus, PANELS settings possible from the front:
- Resetting the famous function that blinks the LED CLIP 0 dB when the summers were exceeded
- Gain adjustment of analog output on standard output, or +4 dB - 10 dB

For all of the device, settings possible from the rear of the unit via miniature switches:
- Selection between the internal clock, that from the word clock input or from the AES / EBU
- When it&#39;s internal clock is selected, the option to select 44.1 KHz or 48 KHz and double or quadruple the sampling frequencies.
- The AES / EBU can be set to "Con" or "Pro"

I bought this RME OctaMic II first as an extension to my future soundcard RME Fireface UC. Indeed, this OctaMic II mic preamps on all 8 inputs while the Fireface UC, it does preamps on the first two analog inputs. The six others do not and everyone knows that to prevent the audio signal exceeds the famous barrier of 0 dB, you need mic preamps upstream in order to adapt the signal before it is digitized.

I thought that until the Fireface UC, I could use with my current sound card ADAT Prodif More: Error! Because it has no word clock output and OctaMic not ADAT input. Impossible to pass the clock signal between the two when the Prodif Plus is used as the master clock. Well, I knew before buying. That&#39;s why I was expecting to use the clock as the master clock OctaMic and the card Prodif Plus shim it but, apparently, this is not the way to proceed because it fonctonne evil. Decidedly, this is the clock of the device that records and plays sounds (here: my PC) to be master and this is the external converters that need to calibrate it. This is what explains why this OctaMic II has a word clock input. Indeed, it has no word clock output. So I am forced to wait for the RME Fireface UC to use it ...

Furthermore, this preamp can be used as analog to digital converter - and not the other way because it has no ADAT. Well, it has a set of 4 AES / EBU inputs (which demonstrates eight channels) via D-SUB 25 but unfortunately they only serve as the clock source for the OctaMic can Rely on it: Can not go out These analog inputs AES / EBU :-( ((What I would have allowed, for example, to use a sound card AES / EBU such as the RME Hammerfall DSP AES-32 in place of the Fireface UC, which could have allow me to access the 8 inputs - 8 outputs 24-bit 192 KHz entirely digitally - but no: in this case, I would have been deprived of outputs 24-bit 192 KHz, argl! And nothing could vouch that if I added an example for RME Babyface receive analog outputs 24-bit 192 KHz TotalMix software of DSP AES-32 (or Babyface) supports the input - output of the Babyface (or DSP AES -32) ...

I have also not been able to use it as an extension to the RME Babyface, which is still cheaper than the Fireface UC, because the latter did not no word clock output - so the same problem as My current Prodif More :-( ((((

To use all 8 channels at once, so I must content myself with the 24-bit 96 KHz that can offer me the Fireface UC, and digital still only for first 4 channels - the other 4 will enter as the Fireface Analog UC has only one set of ADAT interface and it takes two to carry 8-channel 24-bit 96 kHz via ADAT S / MUX. The Fireface UC supports 24-bit 192 KHz, however. Yes but it has not 8 AES / EBU, it has only two in this format - and again on S / PDIF connector. And as he has only one set of ADAT S / MUX, I can get that two channels of 24 bit 192 KHz in this format and the other 6 channels will be in analog. The problem is that on the back of the Fireface, there are only 4 analog inputs: the other 4 are on the front: they are reserved for temporary connections (guitar, MP3 player, turntable , portable recorder, etc..). As I will dispose of the four analog inputs on the rear panel of the Fireface, I will content myself with the 24-bit 96 KHz max. Unless RME has the good sense to release a version of the Fireface UC with two sets of interfaces ADAT S / MUX - while maintaining the input - output word clock, of course

If there are all these constraints, why I chose this OctaMic II then? This is because I wanted to use the RME: the preamps and converters of this brand are simply fabulous. Even in 16 bit 44.1 KHz: although it works well with the Prodif Plus, I was able to experiment and, moreover, that this entand, it is also seen in the waveform and especially on the spectrum of waveform. The sound is clear and precise, burr-free. It is "full" and "generous".

I am a little frustrated that he did not get the opportunity to analog inputs AES / EBU and, especially, that no air input (or set of inputs) ADAT. This prevents me from using this OctaMic outside its framework I have planned for him. But that is temporary. A little patience: as soon as I get the Fireface UC: I will have therefore a sound of thunder.

Its good points:
- A signal to noise ratio and its époustoufflant.

Its negative points:
- No ADAT: can not synchronize to an external clock via ADAT unless you go by the word clock. But precisely, not all devices do not have ADAT output word clock. So argl.
- The audio signal input AES / EBU can not get out on the analog outputs, re-argl!
- Setting the sampling frequency of the internal clock should have been accessible from the front. So I have to choose once and for all of the sampling frequency that I use.

6 of 12 people found this review helpful

since around 02 years, the less is the gain that reveals a bit limiting especially when instrument records not loud like a kora with great pickups ... otherwise it works great is the RME
Did you find this review helpful?yesno
»
Read the 8 user reviews on the RME Audio OctaMic II »