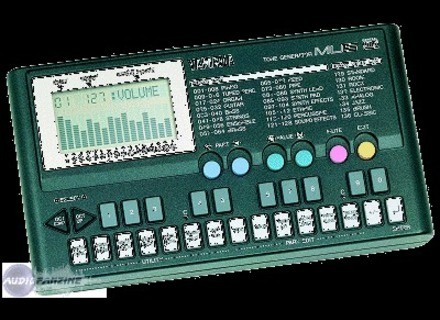 MU5, Sound Module from Yamaha in the MU series.


1 user review
Find it in the classifieds starting at $65 Avg used price: $65

DSPMaster's review (This content has been automatically translated from French)

Yamaha MU5
3
The MU5 is a small expander good, but rev limit: it's General MIDI at face value (28 ratings, 128 programs), and there is no effect intgrbr /> The beast is not programmable, it is just paramtrable (and again I write from a small publisher spcial to get there)
Otherwise, sounds a lot (well, let's say that sounded a lot for the era), knowing that it's AWM technology (ie 12 bits), and that Yamaha had a lot of scratching on waveform memory (some waveforms taient using 3 or 4 sounds)
In short, a little trick when you do not practice one expander close at hand

It is said that the Chinese have small feet, but the Japanese have ingnieurs little fingers! When you see the size of the keys on the front is a feat to press only one key both
The edition of the sounds (or rather of paramtres synthse) is impossible from the front, it must be a CRER SPECIFICATIONS editor to enter the memory via SYSEX

Sounds conform to standard MIDI Gnral. It's synthse AWM, similar that found on small keyboards such ISP.
Some sounds are not evils at all, but others are absolutely pathetic
A good place for drum kits, however, be earning downstream processing
Any fawn, as there is no effect Intgr must process sounds one time or another!

I still and always the MU5, even if it is technically compltement deprecated. This is the kind of tips and tricks, especially since it is able to interface MIDI/RS232 (with the driver YAMAHA CBX), which then gives a full MIDI port for laptops, for example, without fight with the USB