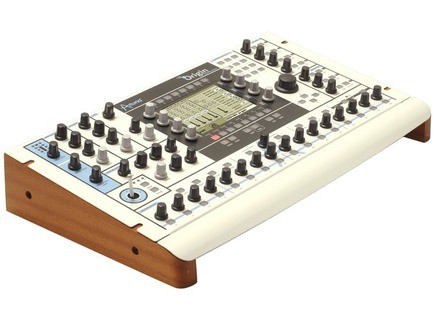 Arturia Origin
4
The Arturia Origin is a virtual analog synth desktop module that has 2 line inputs and 10 line outputs. It does come at high price but it is worth it. I have used this with a cheap MIDI keyboard and it didn’t work for me, I needed to upgrade the MIDI keyboard in order for it to have a nice feel to it. So I purchased a MIDI keyboard that has weighted keys so I could get a better feel while playing with the sounds and patches on the Arturia Origin. If you can imagine a sound in your head, I am pretty sure that the Arturia Origin can create that sound. It may take you some time to get the parameters worked out to the way they will need to be, but it is fun getting it to the way you want it.

The Arturia has polyphony of up to 32 voices and a 32 or 16 step sequencer. There are MIDI in, MIDI out, and MIDI thru on the Arturia Origin as well as 11 total outputs. The Arturia Origin is not even as heavy as I thought it was going to be. But with it being so wide you cannot really call it portable.

The main issue that I have come across is the volume output is not as loud as it should be. You will really have to jack up the volume and hope you can still get a clean recording when tracking the audio out to your DAW.

Arturia Origin
4
It is a rack, very well thought out, ergonomic, with wooden blanks (good idea).
Very well endowed with knobs, it also has a fine and pleasant joystick, multi-configurable and full of pimples everywhere!
Ditto for the audio inputs and outputs, everything is there and quantity!
Bel main screen color.

Beautiful construction. It really is a beautiful object that seems solid.

I have not read - or in outline - the manual. Many things are obvious if one has already had other synths hands.

Editing sounds is easy thanks to the plethora of pots, buttons. The ergonomics are well thought out, both physically and via on-screen menus. Nickel, it rolls itself. From what little I've read the manual, it is very comprehensive and concise.

It is a treat from 0 to interconnect modules CS-80 with other Jupiter 8 ... or MiniMoog! There's a spooky side in these opportunities there

There is also a step sequencer, multitrack, really well done and a lot of options. Arturia people have very good ideas!

This synth is capable of an impressive range of sounds. It can cover all styles and frankly all the sounds. Beyond his powers to imitate (via modules) classic (but what classics!) I heard sounds incredible rhythmic or percussion, organs perfectly credible, detailed, impressive FX ...

I'm not a fan of organ, but the organ sounds are very good and inspiring, even for me.

He excels in the lead, in large sheets, the strings, good big bass. Really sound fields is huge and very good.

I use since June 2013. I got the Solaris shortly after. It allowed me to get a good big week with just Origin.

This is a really lovely synth that can create 0 any type of sound. Really excellent for sound design.

It is a bit expensive new, but its bargain price is still affordable, given the enormous possibilities!

Sure, after receiving the Solaris, I realized that despite all his great qualities, Origin is a notch below in the finesse in sound amplitude and it is true that he a little taste of aliasing on certain heights and some textures. Well, sure, the Solaris is for me the synth extreme, a class apart (the highest in the digital synths??) In which I feel it is well alone!

But .... More ... he has something "a little je ne sais quoi" that makes him a beautiful synth-sound designer. The rack is really nice, emportable easily.

LDVC@'s review (This content has been automatically translated from French)"I dreamed the ARTURIA achieved."

The synthesizer has spent a year and a half to the neighbor who eventually bought his own, I got mine. : D

The audio connection is simplified out of studio (main outputs).

The MIDI cable is connected MIDI 5-pin DIN, sometimes a drum machine RM1x YAMAHA Origin driver (I&#39;m waiting for a Roland MC 909). I will discuss later on accessories connected to the Origin apart from the keyboard. I will experiment with the control surface of BEHRINGER BCF2000. Perhaps a future between original and new ROLAND Jupiter 80.

The memories of Origin simple programs are saturated (sorry, there are two miles of free memory), there is a little more room in multis because I have not had time to look seriously at the Origin not had time to dissect, experiment carefully.

I like the style of trance / techno / tribal, the drum machine sounds that bring mc909 Origin does not need to emulate, I expect something of Origin I end up with the sounds coming out of common. Regardless of whether the Origin never emulate a piano, I can find a piano addition, a dedicated expander. The person who really want a piano with Origin will route filters and oscillators, ie, it can design its piano sound and share more, I love the opportunity to share.

The polyphony depends on too many parameters. Sometimes certain instruments are limited polyphony, so you have to edit polyphonic portamento on or off, finally a lot of things are possible with the Origin, which I printed in English literature before you buy it in 2009.

There is another type of polyphony to 4 MIDI channels to play four different instruments BUT, we splitter if I think to keep the modules on a page of 24 boxes. (Edit menu)

Ah yes, the program Origin for windows works well with Wine on Ubuntu in XP mode. (Some motherboards have trouble with USB, fixed soon, pending the setting you have to go noacpi to the kernel in order to have the USB2 to 28 MB / s multi-core processors and)

Honestly I find this amazing product, the first of its kind I think the user manual in French improves things well, but develop a sound from scratch can be time no notion or without documentation. Fortunately there are more and more models.

(You got it, having found the synthesizer in neighboring modes with the job, I rarely used and hardly used.)

The French manual is a resource and is almost a must for someone like me who wants to dissect. However, people who control the synthesis to navigate, others like me to learn fiddle with the manual. It is relatively simple and intuitive. Change the parameters and hear the result.

It may be interesting from a sound and change settings, or adding a module to quickly make the sound unrecognizable.

Editing of sounds: the development is easy, action is virtually on the sound, which is more difficult and learned to use is the routing between modules oscillators and filters, that is, imagine a sound, and the model through the tools available.

Editing effects is quite simple, it is that there are effects but not what I want to Origin at the base.

10/10: use a mode eploi French language contributes to the perfection.

Sound banks are the strong point of origin with a flat for improvement: too little space for user programs. Whatever happens, we are currently limited to programs in the 1000 version and 1.3.50 256 multis.

I can not judge the velocity response with my little keyboard that is only there to encode the songs.

The sounds are editable at will, that&#39;s fine (not definable style of music, a mixture of what I like).

The minimal effects are present (01/03/50: bypass, Bitcrusher, chorus, delay, distortion, dual phaser, rotary speaker, EQ settings, reverb, RingMod, compressor) with some limited parameters for effects, but it is not I think the first goal.

Missing converters to 192 kHz or more to work on 3D, but the origin is perhaps not there for that.

The duration of use (!) Complicated. I got my first synthesizer in November 2009 with the backlight of order, I received the second, the current December 15, 2009. I did listen to the neighbor seduced by the sound banks, I lent him the time to my work and I just get my synthesizer, having found him a synthesizer Origin Used on its own.

Being young I was on Wednesday in a shop of musical instruments of SY99 time later I started to computer music but I prefer the hardware, not computer music bringing me what I do not have materially.

With experience, I do it again this choice in 2009, but we are in 2011 so I would expect that the future of Origin is high-resolution output (24 bits or more and 192 kHz or more to work fine on the position in 3D , forgiveness, true stereo.)

What I like most: have a copy of this superb instrument.

Cons: there are only four parties and the fan noise of the Origin, it&#39;s pretty exhausting, it must be fit before turning on the Origin, it limits the use. I expected a product Fanless (without FAN since the power is 25 watts maximum, but I&#39;m not Fortich in heat). It might be a larger diameter fan turning slower, quieter simply.

Rating 9 / 10 which is very good, but the fan noise is not negligible.

6 of 16 people found this review helpful

Published on 06/28/12
Arturia announces its V1.4 firmware update for both the keyboard and desktop versions of its Origin hardware synthesizer.

See all 335 photos of Arturia Origin »

View all 17 videos of Arturia Origin »

Arturia Origin manuals and other files