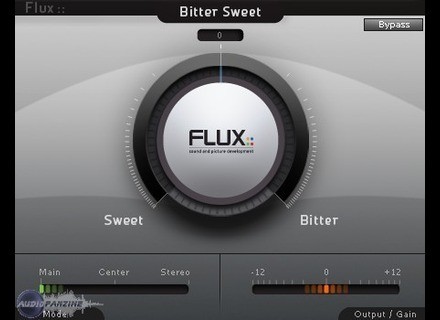 Flux :: Bitter Sweet [Freeware]
4
The Flux Bitter Sweet plug-in is a piece of free software that is available to anyone out there. The plug-in is transient processor and is a very simple one at that. They also have a Bitter Sweet II plug-in, but I just downloaded that one and have more experience with the original Bitter Sweet (although there isn't too much of a difference). Getting the plug-in downloaded and running is a simple thing, as you just need to do the Flux's website and download it under freeware. Then just follow the step by step instructions on how to install it, just like you would any other plug-in. The plug-in is compatible with just about any sequencer, so this shouldn't be a problem for most. The interface of the software simply has a large knob to make your sound either more 'bitter' or 'sweeter.' Making it more bitter will boost the level of your transients, while making it sweeter will do the opposite: it will reduce the amplitude of the transients in the signal. I don't think that even the newest user of plug-ins will need any help from a manual here.

I'm currently running the Flux Bitter Sweet plug-in on a Mac Book Pro that has a 2.2 Ghz Intel Core 2 Duo processor and 4 GB of RAM. I run the plug-in in Pro Tools LE 8 that runs with a Digi 002R audio interface for the most part, but I also run it with a Digidesign Micro Box if I'm on the go. I can't say that I've ever had a problem running this plug-in within my home studio configuration. Then again, I've never needed to run more than two at a time if I can remember correctly. Having said this, I think that most people will find that they don't need to run too many of them at a time either, so as long as you have a decent system where you can currently run some plug-ins smoothly, I think you'll be all set. Either way, it's free so you can at least try it!

You really can't go wrong with a free plug-in! So I can't really say too many bad things about the Flux Bitter Sweet plug-in since indeed a free one. While not the most in depth or powerful tool, it can certainly come in handy on occasion and I'd certainly rather have it than not. It has a realistic tone quality to it with a lot of brilliance, and can definitely add something if you use it right. If you've got a digital audio workstation, I'd definitely recommend downloading the plug-in, as it's free!
Did you find this review helpful?yesno
»