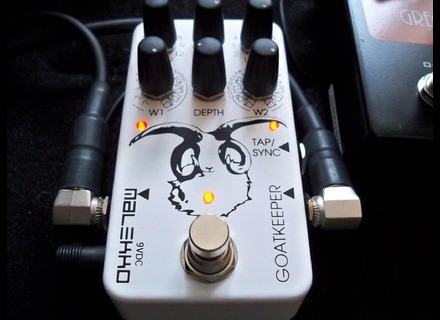 Malekko Goatkeeper
5
SOUND:
The Goatkeeper is rather quiet, even when combined with a high-gain amplifier (there isn’t too much ‘swooshing’ in the background when not playing, which you often hear with tremolo-type pedals). Also, the quality of the effect is rather excellent, whether turned up low (to color the original dry tone) or to produce a full-on effect with maximum depth. Obviously the sound of your guitar, bass or synth will alter with progressively more as you increase the depth, but not in a negative way. Third, being able to describe the nature of the sounds possible with the Goatkeeper does not do it justice, which is why there is a demo video accompanying this review. Even with the depth up only quarter way, the effect is fairly pronounced; and in most instances you don’t need the depth/mix much higher than 12-noon for an intense result. Essentially, the Goatkeeper can do some interesting things to a guitar tone, beyond the usual single tremolo classic results (e.g., slow Pink Floyd Gilmour to fast Surf Rock). With the depth only quarter way it can pack a punch with high-gain Metal rhythm and create unusual pulsating or percussive results that are truly unique. Of course, much of this has to do also with how you combine the two stages of this dual-tremolo pedal, as explained in the General Use section.

OVERALL IMPRESSION:
The Gatekeeper is a serious contender if you’re looking for a tremolo that is beyond a typical tremolo. At $225 USD it is a middle-priced pedal, capable of classic tremolo and into the realm of synth sequencing patterns. Developed by an electronics company that makes both guitar pedals and synth-based gear, you know you’re getting the real deal whether using the Goatkeeper with a guitar, bass or synth (along with some freaky results if used on vocals). The range and diversity of the Goatkeeper, besides its quiet operation, make it nothing short of impressive as you mimic some basic classic tremolo or delve into the other three modes: Sequential, Composite or Modulation (see general use for explanation). Even with the same settings (sine waves, repeats, depth and rate) there are different flavors and results, but begin mixing and matching the waveform and repetition parameters and it doesn’t even sound like the same pedal. The potential complexity of the Goatkeeper may scare off the plug-and-play crowd, but for those looking to experiment and create unique patterns and sounds this pedal is a keeper.


GENERAL USE:
There are two master controls (besides the footswitch engaging and disengaging the pedal) – the Depth (the amount of mix with the dry signal) and the Rate (how fast the tremolo works). Now, there are two different stages or tremolos in this pedal, and if you keep to just the first stage you achieve some pretty classic tremolo effects while using one of five waveforms (sine, ramp up, ramp down, big square and pulse). There is a sixth wave option which is random. You then control how many repeats the tremolo has, from one to twelve, with a thirteenth ‘random’ option. And so, just with the one stage you can go from fairly basic to very interesting and wacky as the waves play randomly with a random number of repeats. To make things more interesting, you can combine a second stage using any of the waveforms and any number of repeats (from one to eleven). How you combine the two stages for some unusual and interesting patterns vary significantly since different waveforms and repeats have different outcomes generally, but also different outcomes specifically based on three other types of settings. Besides the basic tremolo first described, you can run the two stages Sequentially (the two stages run one after the other). You also can create a Composite (the two stages run at the same time). Finally, there is a Modulation combo (the two stages run together, but the second waveform modulates the first waveform). This is not as complex as it sounds, but the Goatkeeper definitely is not a simple pedal with a few options. It takes a solid afternoon of having fun with the pedal to get to know its characteristics and how it can affect your instrument. This is true not only relative to all the possibilities and the pattern effect you’re trying to create, but also how much depth/mix you apply and its rate of speed.

OTHER DETAILS:
The Goatkeeper measures 5.5 (L) x 2.25 (W) x 2.5 (H) inches or 13.97 x 5.7 x 6.35 cm and weighs 10 ounces or 290g. Its all-metal chassis has a powder coated white paintjob with black screen writing/graphics. The footswitch feels solid with a click when engaged/disengaged, although there is no audible clicking in the signal. The waveform/multiplier knobs are detented (they click in place for each position) for quick and accurate settings and the depth/rate knobs feel smooth and solid when turned. There are separate LEDs to show the waveform intensity of each stage, throbbing red in time with the Rate or speed. The Goatkeeper can work on a 9VDC battery or a standard power supply (negative tip) while drawing 50mA of current.