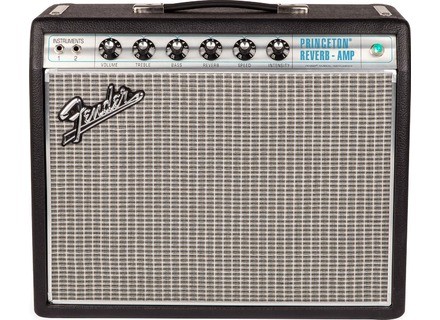 bobichbil's review (This content has been automatically translated from French)" Mistrust ..."

The configuration is simple: yes. is connected and playing

The manual is clear and sufficient: yes
Gets it easy to sound good, yes. The sound is very rich bass with a lot of heat. Lots of headroom despite its 12 watts. Reverb and vibrato fulfill their role perfectly.
Against by the amp produces a lot of noise (frequencies vibrate the amp without pushing the amp volume). I do not know if this is related to the model that I bought in particular but mine is already gone for repair after one day because these parasites make the amp sounds unusable!

Will it fit your style of music: yes (blues, jazz)
What kind of sound you get and with what settings: clear sound with great warmth. The amp starts to distort from 5 volume that is already very strong. impossible to do cruncher apartment for example.
With what (s) guitar (s) / low (s) or effect (s) do you play: LP, SG, 335

How long have you use it: 1 day
Have you tried many other models before buying it: yes
What is so special that you like most and least: most: the sound!! least: the noise!!!!!!!!!!!!!!
How would you rate the quality / price ratio: average ...
With experience, you do again this choice: yet not. I expect the amp back to service and I will edit this post.

12 of 19 people found this review helpful

Xavy's review (This content has been automatically translated from French)" Terminator"

Fender '68 Custom Princeton Reverb
5
What kind of amplification (lamp, transistor, ...)?
It's all lamps

What is the power delivered?
12W sufficient to prevent its neighbors to sleep if needed.

What connection?
Two inputs, jack, one with a little more gain.

What are the settings, the effects?
gain, treble, bass, reverb, intensity, speed (the latter two for the tremolo).
I wish I manage myself mediums, but hey the board is not very big either. That said, it is not a problem and it does not stop him from having a good sound.

The configuration is it simple?
Yes.

Gets it easy to sound good?
One branch, while 12H, it sounds, it runs a little treble and bass sounds and more! Reverb not working on one I tried ... Tremolo, managing two knobs, it is a little everything you want (I can spend hours trying to stuff full of morons with a tremolo ...)

The manual is clear and sufficient?
I tried this amp in the store, I have not seen the manual.

Is it your style of music?
I play rockabilly, swing, rock and hard rock.
it suits the devil and his demons!

What kind of sound you get and with what settings?
For the first 3 is happiness was THE sound, clean for the swing, rockabilly crunch potbellied for 'we walk on the gain and treble for rock and hard rock, with one or two TS808 in , it will do well. There means venturing into funk, and surely many other things, the EQ coupled to gain a great versatility of sounds available.

With what (s) guitar (s) / low (s) or effect (s) do you play?
I played the amp with a gretsch white falcon (Bigsby and TV Jones) is sublime, a couple never deformed.

What are the sounds you prefer, you hate?
J4aime all the sounds I got out, starting with the cruch rockab ', which reminds us of what could be the normal channel of an AC15 in much better ... But other sounds have convinced me!

How long have you use it?
I tried it in store, it convinced me to buy it as amp for playing at home, I make an edict when I have used a little longer.

Have you tried many other models before buying it?
I played a lot of things before, the marshalls (MG100DFX 1959 plexi), the VOX (AC15C1, AC15HW), an ENGL (ritchie blackmore the signing), and my faith for the clean-crunch exploitable for my music styles it looks like a panacea ...

What is the particular feature you like best and least?
All this amp is to love! Little less, it is the absence of medium knob, but hey not a big flaw, especially since the sound is very well without taking over cabbage ...

How would you rate the quality / price?
Ah, it's a bit pricey, it turns to 900 € for a 12W is a little slap, especially as factory default, the reverb did not work, I will have rather seen around 700 € but Parade lights inside is surely something in the price of the machine ...

With experience, you do again this choice?
Yes, because I'll buy it.