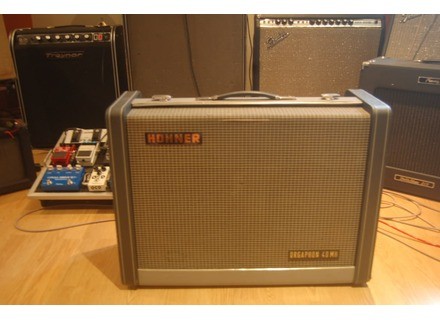 Dryfe's review (This content has been automatically translated from French)" Crénom of diou! Great deal!"

Hohner Orgaphon MH 40
5
several models exist (see specifications on the links)
http://www.ampaholics.org.uk/hohner__orgaphon_40__2x12_valve_.htm
Mine is closer to mh41 short, like the picture thread in this forum:
http://www.tdpri.com/forum/amp-central-station/336043-nad-hohner-orgaphon-need-info.html

Two bass channels (for keyboards) and normal (Guitar)
- With each channel:
1 tone for the bass channel

Everything works, despite the age of the beast (mine dates from 1966)
The lamps are original!

Simple Setup so you branch, you play you groped! and applaud you!
No manual available on the net but if we look a little
Yes its a good course! Excellent sound I would say
(See below)
I set mine to standards-ground isolation including

It's gone.
It is said that it is a compromise between VoxAc30 and Twin:
Yes, not as slamming a twin, not as "mushy" than AC30.
I would say that this amp is dark, dark and warm: a lot of "body", not messy at all, a good definition, but with little acute mediums.
It does not shout in your face, but it is not fat!
I would say that its clear, with my Ibanez AS103 was a sound of a nice velvety. It is never flashy! Ideal for jazz at the old (way Wes).
With a Strat ': this is a real treat, it sounds terrible! Looks like he's done for!

For distortion / crunch:
There is not, and you can always run to saturate the machine.
External pedal required.
For my part:
I tried one rat (in Ruetz mod): ca does!
With the wah engaged: superb - this amp flatters medium and wha switched to the lowest limit, not-so showy ... it turns out to be even more enjoyable by coloring the story as it should.

Bluesy wish-friendly character of the guitar.
If you push a little, well Vintage Rock stoner who see big task! It accepts
Anything goes: my wah Fuzz, yes! Flanger (Jack Deville mod zero), yes!
The delay (Artecpour begin Eventide to finish), it is!
I spent a weekend in mumuse above, for sentencing.
For jazz, blues, reggae and others, and Rock60's-70's and derivatives, this is great!
For the large metal: we know that this is not the cam there to choose, come on!

On keyboards:
Not really tried masi I did spent a Yamaha SK20 in for fun
Bah m ... it's a keyboard amp it seems!
I would later tell you what I think
(Well, done originally for organ and clavinet, so I do not worry too much)

The extras:
His vibrato is GORGEOUS

Inject the Réveb 'is psychedelic wish!
Reverb is also a beautiful Sombritude and saturates very quickly!
Can be very interesting, with unique things to perfection.

Anyway, all that to say that it is happiness, to 100 euros, I say BANCO!
An original amp that beautifies everything that passes him by loupiottes and worse it is beautiful!
Heavy (very heavy), but beautiful!

- Bought last month, I did revised, and I played a lot the last two weeks: happiness.

We should now try to see as a group.

Value for money: bah Wanted unbeatable, rare and cheap!
To keep or to enter if you see one go.
Mine was "the right corner" to a lurker amp cheap lamps for a few months.

The guy who sold it to me told me he did not know much about it: you can remove the speakers and sell them as the price is already ca-oh, not crazy eh.