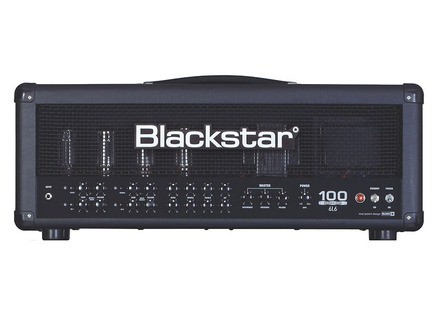 Series One 1046L6, Tube Guitar Amp Head from Blackstar Amplification in the Series One series.

Comes the master section, with presence and resonance controls, a master general and DPR side, a system that can reduce power up to 10% but not that.

At the rear there is a jack and XLR line out, an effects loop with a button or 4 DB - 10DB, 2 speaker output that is controlled by a knob for 4/8/16 ohm jack and footswitch.

Otherwise a very nice aesthetic with a solid head and a black logo 6L6, all displaying rather clearly that she wants. A perfect finish, not a single fault at this level!

The manual that comes with the head is very clear and provides a very good starting point to understand the beast.

Knobs react very well and they are all useful. I found a great complementarity between the knob and bass resonance that really helps sculpt the bass / lower midrange to sound rather sharp or rather thicker with large shade.

The ISF is very effective on this amp for a change the voicing of the beast, perhaps a flat knob on the right side of the race (English) who spent 7 darkens the sound a little too especially with saturations.

DPR works well, but do not do this illusion, even at the lowest power delivered is still important. This is the responsiveness of the master general who can be able to play in the same. This is a very good tool to control power according to the situation repeats, small, large room.

Clean sounds, not having a lot of amps test on clean sounds I can not compare it to others. It is this strength of this versatility, modes, and one equa effective LAI, there&#39;s plenty to do. I have a weakness for fashion with beautiful warm sound rather low and hot, with a TFR which tends strongly to the left for a clear and clean end. A report that is clear is that very clear on the long run the gain knob, allowing for a clear sound with good power reserve, and does not suffer from a lack of power compared to other channels as on some heads.

The crunch channel is a weak point for me, I find it quite right, but great personality and he tends to go quickly and distortion for voice I think. I think that it was not designed to be a real good crunch but for a small distortion boostable. The I find it really useful is that it allows for a third possibility of distortion and therefore have everything under foot. Concrete example, I mainly play on my rhythm a little OD1 and OD2, OD2 on the solos and I use the crunch mode or even great for arpeggios plans or plans with some dissonant sounds, to bring out the notes.

Here the best, OD1 and OD2, we go with the very large distortion although the super crunch comes there too. The OD1 a distortion a little more open medium, where OD2 is more compressed, dark, mediums more accentuated.
Again the torque equa master and do a great job, you can really shape the sound we are looking for an edge to his thrash or rather a response in the low / low mids larger for large PM. Personally I mostly use OD1 to have a style rather his death 90 years, but spend a great riff Bolt Thrower on OD2 is just enjoyable. I use OD2 rather lead sound a little dug allows me to have midrange / treble less aggressive while I rest on the bridge pickup.

I explained that it was a head fairly quiet with very little wind.

A 9 because it lacks a real crunch but me it does not bother me instead.

What I like most is that versatility, control is the sound.

I have not tested many models before, the blackstar HT, H & K, a little marshall too. What I have to decide what it is exactly to my specifications.
I wanted a head high gain, 50/100W with at least two separate equa channels and a master section complete, XLR output. Then, the DPR, the ISF, 4 channels, whether blackstar is a brand that I know and finally nine attractive price convinced me.

We have a 4-channel 100W head with many controls, very versatile and a perfect finish for about € 1400 new. For me the price / quality ratio is excellent.

Personally it meets all the criteria and I would put him around 10.
Objectively could regret the lack of reverb, a fairly substantial weight, not really a crunch crunch and resonance / presence common to all channels. But the price is certainly not the same.
Did you find this review helpful?yesno
»

Blackstar Amplification Series One 1046L6
5
This amp uses four 6L6, four ECC83 and 1 ECC82.
Level connectivity, it is quite full. It can be controlled by connecting the output noon and HP emulation and pretty good. The amperage output is adjustable from 4 ohms to 16 ohms with a single button at the back of the head rather handy!
Construction is serious and amp air strong enough to last, the finishes are more than adequate.
The power output is 100 watts on 4 channels (clean, crunch, OD1 and OD2), it was not bad under foot, no need to go much volume to shake the walls.
Level settings, it may be noted that the ISF can change the way of his fun with his British and American works and not evil. DPR and also allowing you to play with large saturation at moderate volume (should not reversible either, better to avoid plugging into his room to maintain good relations with the neighbors!)

The amp gives a lot of opportunities from various settings. It takes time to find a suitable sound, but in return, no sound is bad, and you can immediately make the guitar sound, even with all the knobs at noon.
May be a slight problem with visibility settings. There's just a white dot on the knobs, and it is not always easy to visualize the position of a knob instantly, especially with little light.
It also lacks an equalizer per channel, but I quibble here for the price! (There is one equalizer for channels Clean / Crunch and another one for channels OD1/OD2)

I play rock, hard rock and heavy metal. The sound is perfect for me.
Times for AC / DC, I use the Crunch channel for a very good vintage grain. Distos for Hard Rock and Heavy I use the channel OD1, OD2 channel is dedicated to solo in my case.
The receiver is coupled to a modified cutaway Engl cabinet (V60 Crosses with Greenback) and I use it all with a Gibson Les Paul Standard 2008.

Clean sound is not bad but not really extraodirnaire, this is clearly not his strong point, but the sound distortions are truly exceptional for the price. A bit more synthetic than a Mesa Boogie, but much clearer in the precision of sound. Everything is perfectly audible, this amp does not spray!
on the other hand I tried with other firms and I found it sounded worse. Pay attention to the association with the baffle! Coupled with a good firm is a showman to cut the metal!

I use it since November 2011 and I still enjoy playing it. Initially, I had gone to the gear Engl (Invader or Savage), but I found them quite typical grain. I found the Blackstar more versatile in modeling sounds and offering more possibiltés.
In short, a very good amp with a serious construction and an exemplary finish. An excellent sound for metal in general.
Without hesitation, I remake the same choice. For the price, it is almost impossible to find an amp of this quality to the Metal.

See all 33 photos of Blackstar Amplification Series One 1046L6 »

View all 3 videos of Blackstar Amplification Series One 1046L6 »