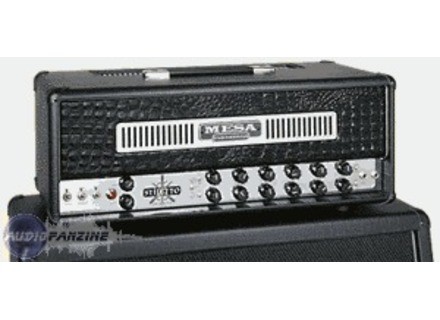 Multi-Watt, Channel-assignable power amp allows you to assign either two or all six EL-34 power tubes to each channel for power ratings of 50 or 150 watts of Class A/B power via independent 50/150-watt power switches

Output Level Control (over all channels when activated)

Footswitchable Solo Level Control (over all channels when activated)

Slave out with level control

It is fairly easy to get a good rock and clean sound out of this amp with minimal tweaking. The manual is clear and gives you good sample control setting starting points. Although it is easy to get very usable sounds right from the start, there are a vast array of tone shaping options on each channel so you can fine tune your sound, which might take awhile to dial in.

I have used Gibson V's, Les Pauls and ESP KH-2 guitars with this amp and it lets the characteristic of each guitar through. I primarily used a Mojotone 3x12 cabinet with Celestion CL-80's.

My favorite sounds are the rock and 80’s rock sounds, which I think this amp excels at.It is possible to get a nice Plexi lower gain sound on the clean and/or crunch and then adjust the controls for a JCM 800 tone on the crunch channel.

The clean tones are really nice, as well. I have been through a lot of amps and this is one of the better clean channels I have used. It really shines in a loud, live setting. In the past, I have had trouble with my clean channel being able to be heard through the band mix and this one has been great for that, due to the fact that there are very useful tone shaping options to choose from on this channel.


I usually go for a nice thick Jerry Cantrell AIC tone, to use with my modern rock/metal band. This amp fell short for me in getting this tone. It could get close but just didn't have "it". It is a very bright amp and didn't have quite enough saturation to get the heavy tone I needed. It took a Boss SD-1 nicely but in the end still didn't do it for me.

It would work best in a classic rock type of band.

My favorite thing about the amp was the buildt in solo boost feature on the foot pedal. This was the first amp I bought that had this - great feature! I also liked the clean channel, but since I rarely use cleans in my music, it is a wasted feature for me.
I bought this on closeout and for the price it was a good deal, even though it fell short for me. Boogies are buildt like tanks!

Overall, this is a fantastic amp for bright classic rock and rock tones but does not do well for heavy rock or metal.

This amp is a well built tone generator that can give you many classic tones, but for what I needed it to do it was just ok.
Knowing what I know now I would not have bought this when I did.
Did you find this review helpful?yesno
»

toyu's review (This content has been automatically translated from French)

Mesa Boogie Stiletto Trident Head
C is just to answer al opinion against it!
go to the site in the mesa artist to gallery to see if the Yanks do not interest sy
ps to get out on Sunday!

,dropoff Window
Did you find this review helpful?yesno
»

sade's review (This content has been automatically translated from French)

....
Did you find this review helpful?yesno
»

ya-lys's review (This content has been automatically translated from French)

Mesa Boogie Stiletto Trident Head
5
With Mesa EL34 50W/100W
grained
disto enjoyable
sustain a cry of happiness as a girl
with the crocodile on the faade (veridique!!)

Like the other amps you plug you play and you rule,

Hello, I see no one has the head s'interresse especially not the Yanks, maybe to the sound very British, but I trash with class.
Amp head with a choice of 50W/150W with EL34 tubes, identical to the lamps so Vox amps English, so very warm and clear sound clear, nothing to do with the marshall, for heavy distortion we find the grain super late mesa type correct, but EL34, ie more british, roughly a little less trashy metallica nag, but hey there's rpondant anyway, I would say that from the top adcoiffe range of heads like marshall tsl 2000 (normal for the difference in price) ... it must be said that one can have 3 DIFFERENT grains, let me explain, there are two modes faade
Bold: Giant Peach
Spongy: vintage sound
mesa explanation: the spongy mode is actually a copy of old electrical circuit sending fewer potatoes in the lights like a grain more random image (spongy / sponge), and more that seems made to last lamp .
it is true that two DIFFERENT grain, but even with the lights so the same color.
otherwise it is like on the Dual Rectifier, a choice at the back, between the tube and the silicon rectifying diode, the difference is still quite subtle but still, after mesa of the tube is better on the solo, and silicon rythmisques when the EQ and gain are cranked, and it's true (less silicon draft)

but those who say that the mesa is reaprendre to play because he heard all the defects is that they could not play at the base and played on daubes.dsol

We will finally say we have a Mesa Dual Rectifier head with a grain british and type 2 amplification (bold and spongy) really identifiable with a little footswith two buttons that lets you toggle between the two channels (which when even all three modes and crunchy clean fluid drive accessible only facade) and a single player, just a facade knob in allowing her to have even more master.
moa thus, fewer defects that rectifying heads and apprciable knob to adjust the sound output in addition to the master, and that Eq very balanced not break your head, so very versatile, but the best c ' when same is to try to judge

Added: I added a switch to be able to turn off the fan (for making studio), it is twelve volts, and when I put out that gives more potato, then a sort of bold or spongy to boost 12v
I go back the notes because after searching, it is really screwed up this amp, and complies fully with single or double coil and the quality of old pedals