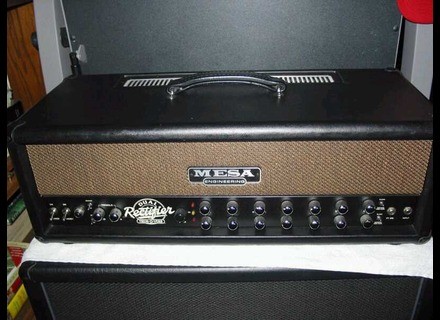 By nature, Mesa's are somewhat tricky to dial in. I have a Mark IV and that amp took me quite a while to get used to the controls. It's like a spaceship! The Tremoverb is a lot easier to dial in. The EQ controls on Boogies tend to work differently than other amps. For example, the treble control will increase the treble on the way up, but when you turn it down, it increases the bass. Little things like that make these amps sort of finicky as far as their EQ's. The three channel Rectifiers are very bright by nature. When I owned a three channel Triple Rectifier, I literally had to turn the treble control all the way down to get a good sound. I can leave the controls at noon on the TVerb and it sounds great. Everything else is pretty straight forward.

All Boogies are made extremely well. My only gripe is the FX loop. They came with parallel loops with don't work well on these amps. I modded mine to be series and it works way better.

The Tremoverb is a unique beast in the Rectifier series. It's like a Revision G Rectifier but with the addition of a blues mode, tremolo, reverb, and somewhat improved clean mode. As I mentioned above, I can set all of the controls to noon an it sounds great. Not something I could have done with my 3 channel Rectifier.
Rectifiers can sound a little harsh, but if you dial back the treble and presence, they can sound pretty smooth. I tend to like darker sounding amps anyway.

The blues mode is a great addition to the amp. It sounds awesome with a Strat; very warm and thick. I also love the vintage hi gain mode. My amp tends to live on that mode, as well as the clean mode. That way, you have your basic clean, distortion sort of set up.

Rectifiers are made for rock/ metal. Sure you can get lots of other tones out of them, but if you wanted an amp for blues, there are better options out there. They have a very specific sound that I haven't really heard in other amps. Very heavy and aggressive.

Overall, I love the amp. It's very versatile for a Rectifier, but it's still a Rectifier. It's not going to be your amp for classic rock, but it can do that if you want. If you buy a Dual Rec, you are looking for that iconic sound. All of the extra modes and setting are just icing on the cake. I bought it for it's Recto aggression, and that's what it does best.

Mesa Boogie Trem-O-Verb Head
5
The Trem-o-verb is kinda like Mesa's dirty little secret. It's really a mind blowing amp and gets overlooked due to the popularity of the Dual Rectifier. However, I find it actually is better in certain aspects. It features many of the features the Dual Rectifier has, but it also has tremolo, reverb and a blues setting. Aside from that, it should still feature all the well known aspects that everyone loves from the Dual Rectifier.

Mesa did a great job at laying everything out on this. It looks pretty much exactly like the Dual Rectifier, and it acts in the same way. The manual does an amazing job at describing what everything does, how each of the tone controls interact with each other, suggested ways to dial the amp in and so on. Mesa has some of the best manuals on the market, so I highly recommend you at least gloss it over, even if you already know how to dial in a normal Rectifier.

The sound of this is really mind blowing. It's not only more versatile than the Dual Rectifier, but it seems to be tighter, yet more organic as well. The thing really goes into "kill" mode once you boost it, too. However, this amp can do more than just metal. It's a jazz, blues, rock, pop and metal amp all in one. If you can think of it, you can dial it in. It's really only limited by the number of channels it has. Oh yeah, and the reverb and tremolo aren't too bad, either.

If you're looking for a Rectifier and play a wide range of music but can't afford the Road King or Roadster, check out this amp. Why this amp isn't more popular, I have no clue. It's seriously one awesome amp that can deliver tone for days. They go for a decent price on the used market as well. I actually recommend this over the new 2010 Rectifiers if you tend to play more than just metal.

cookie's review (This content has been automatically translated from French)

- The config is very simple - The manual is clear - Getting a good sound is relative, because the knobs react much about each other ... but hey it sounds necessarily passing it a little time.

It is appropriate to death, I play in a rock / metal, and this kind of good amp .... not a wiggle that's what it takes! The sound is not too fat to me because I am set in Hi-gain JJ is quite compressed and "deaf", not too bright basically the clean sound is not bad at all, with the integrated tremolo, CA gives style to the amp. It sounds big DUPLEX in this config ^^. Nivo guitars, I play Shecter tempest custom SD ca .... SH4 already sent brick, I have an Epiphone SG rise EMG that I would have to try it to see one day and Washburn custom. By Randall amp I have a 4x10 Celestion in 80's. NS2 and DD3, a wha.

And well that changes everything, more progressive, more aggressive enorrrrrrrrme!

How long have you use it? - It'll be three months Have you tried many other models before buying it? - A little too much! What thing do you like most and least? - The most is the sound, the less is the dual channel AC can be annoying at times and depending on the style played How would you rate the quality / price? - Me I bought OCCAZ, anyway it does almost not on the market ... It is a rare and coveted supermodel shot. Anyway MESA = = DEAR SON With experience, you do again this choice? Bluntly, there is no comparison! It really is an amp that kills me it suits me perfectly in this config, I seek grain, power and sound quality. But I hesitate but really can be facing an ENGL SAVAGE / POWERBALL (mounted as I want ^^), or a VHT. Wholesale and finally ... If you find this amp, please go ahead. These are the first series in MESA rectif dual, so it's not common, they are considered the meillleurs models.
Did you find this review helpful?yesno
»