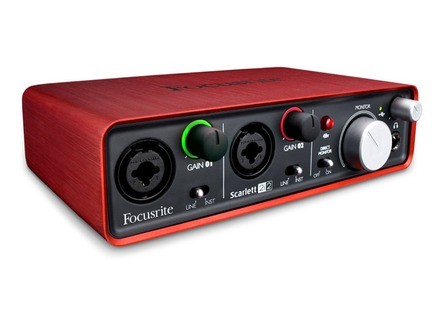 Scarlett 2i2, USB audio interface from Focusrite in the Scarlett series.

Focusrite Scarlett 2i2
5
Using with RE20 and DBX286A into an Asus SSD laptop with excellent results.
Use of FETHEAD to boost gain on RE20 did not add any noise at all to 2i2.
Build quality is very high and performance is excellent for recording, podcasting and all vocals, and instrument direct in. Accepts XLR and 1/4 inputs. Buy this unit with confidence.
Did you find this review helpful?yesno
»

Focusrite Scarlett 2i2
4
The 2i2 features 2 XLR-TRS combo inputs with independent volume knobs that have an LED ring around them to indicate levels. These inputs can be switched between line and instrument levels independently of each other. There’s a 48v button for microphones that require phantom power. There are 2 ¼” TS outputs on the back for your monitors. You can enable direct monitoring via a switch on the front and control the overall output of the audio interface via the monitor knob. There’s also a headphone output with an independent volume knob. The interface is bus-powered and connects to your computer from one USB port on the back. The one downside to the unit is that it doesn’t have a MIDI input/output which some audio interfaces in this price range do have.

I've been using the 2i2 for 2 years with Renoise, Maschine, and REAPER on both a Windows 7 and 8 64-bit system using an Intel i5 2500k @ 4.5ghz. It's possible to get the latency under 10ms round trip, however, I ran into driver instability when trying to go lower than that where the driver would sporadically crash and cause lots of distortion and slowed down audio. Outside of that, absolutely no driver problems or latency when recording instruments.

It’s a pretty simple interface and very straight forward to use. Very clearly labeled knobs and switches for all of the functions. The software for controlling the interface is a one function affair--changing the buffer length. All other functions like changing the sample rate and bit depth are done through the Windows Control Panel.

It’s a fairly low-noise unit, I’ve mostly used it for recording guitars or synths directly and I have no real complaints there. The headphone output is not bad even with high impedance headphones like my 250 ohm Beyerdynamic DT880s. There’s not a ton of gain and I need to set it about half way on the headphone volume knob to get to my preferred listening level, but it does drive them okay and the DAC is very good. It would certainly drive lower impedance headphones satisfactorily.

It’s a great interface for someone who doesn’t need a lot of inputs, outputs, or advanced DSP features. Although the lack of a MIDI in/out is a bit of a bummer, if you just need to record one or two instruments or if you need an interface for your mobile production setup, this is definitely something to consider.

Focusrite Scarlett 2i2
1
USB powered
Red aluminum housing, which looks very nice and solid
The plastic buttons do not seem very sturdy (especially the inst/line switches)
2 line/instrument inputs on the front panel
Master output
I use it at home to record guitar/bass
The preamps have received several awards

I use it on a Mac (OSX 10.9) and have no stability issues
With Live, the latency is around 14ms at 256 samples, which is slightly perceptible
Further down I explain the problems I've had with this card.

I used it around 6 months before changing it
From the start it was impossible to record without the clipping LED turning on, even with the gain at 0. I was forced to toggle to "Line" mode and bypass the preamps, which seemed to be of very bad quality. I had this problem both with active and passive instruments.

I returned it right away and the store where I bought it gave me another one (the same model). When I got home, I plugged it and had a constant buzz when I armed the track to record. And yet I can see lots of home-studios where they use this soundcard (Misha Mansoor of Periphery, for example).

I returned it again and bought a Steinberg UR44, which is twice as expensive, but much more reliable.

For the price, it's surely a good soundcard, it was my first card of this type, and I was disappointed. I wouldn't choose it again.
Did you find this review helpful?yesno
»

Latency problems from time to time, because the software uses a lot of RAM, but certainly due to the performance of the PC.

I've used it intensively for 10 months to record DJ mixes and as audio output for song writing (Ableton Live), and I haven't had any problems up to this day.
Did you find this review helpful?yesno
»
Read the 20 user reviews on the Focusrite Scarlett 2i2 »

View all 5 videos of Focusrite Scarlett 2i2 »

View all 18 discussions on Focusrite Scarlett 2i2 »
Cookies help us improve performance, enhance user experience and deliver our services. By using our services, you agree to our use of cookies. Find out more.