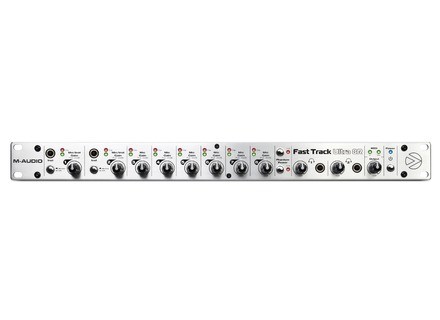 Oliviercool's review (This content has been automatically translated from French)" Unusable, in my case"

Can be used as standalone prampli microphones 8 channels or as 8-channel mixer, according to rglages effectus advance on the computer.

- 8 combo XLR among - TRS
- 8 TRS outputs
- Between 1 - S / PDIF replacing the entries - analog outputs 7 and 8
- 8 pramplis Octane (which supports the XLR connectors among combo: the signal from among Jack disregard the pramplis)
- Between 1 - MIDI output
- Frequencies of chantillonnages supported: 44.1, 48, 88.2 and 96 KHz 16 bit and 24 bit
- Switchable phantom power supply for 4 channel group
- With attnuateur - 20 dB on each channel
- With among instruments and taken inserts on 2 among premires

(Let me time to finish my opinion!)

Feelzeloops's review (This content has been automatically translated from French)" Maudio and drivers ...."

M-Audio Fast Track Ultra 8R
1
Can not be used with a laptop Asus K50IJ.

Sisi! I assure you!

So I can only judge the compatibility of this product: it is zero

Incompatible on a Asus K50IJ Laptop Drivers.
Can not be used with Asio4all

M-Audio has always proved its incompetence to develop drivers.

I do not want to change computer, the card was sold to a friend in the process. It works very well on Mac.

M-Audio Fast Track Ultra 8R
4
I bought these for 8 inputs, for maquetter drums and percussion. I use it with a laptop cpu: i5, 4 gigas ram. I also used the stage to manage sequences (Cubase, Ableton Live)

The drivers are stable, never crashed yet. I use Cubase 5 and Ableton Live.
I record 8 tracks simultaneously carefree and reading???? I've never been blocked read (20/30 tracks)

I use it for 3 years so as to save read sequences. It is trimbalée right and left and still no problems.
What I like the most, 2 independent headphone outputs, 8 outputs standalone ...
What I like least: the software that goes with ...
excellent value for money

This is not the big card studio but it is great for work at home ...

Usable as standalone preamp 8 channel microphone mixer or as 8 channels, depending on the settings on the computer beforehand.

- 8 XLR combo inputs - TRS
- 8 TRS outputs
- 1 input - S / PDIF output that is used in place of inputs - analog outputs 7 and 8 when activated
- 8 Octane preamps (which supports the XLR combo inputs: the signal from the input jack disregard preamps)
- 1 input - output MIDI
- Sampling frequencies supported: 44.1, 48, 88.2 and 96 KHz 16 bit and 24 bit
- Phantom clutched in groups of 4 channels
- With Attenuator - 20 dB on each channel
- With input jacks instruments and inserts on the first 2 entries

This unit does not meet my specifications time sound card. Yes, because I always use Adobe Audition v1.5 invincible as multitrack audio software. Yes, I know, this software is now in version CS6 (as of January 2013) but there are two main reasons why I am hooked to this old version. First, it supports MME / WDM individually on each track in multitrack. It means that I can assign, for example, track 1 on the input - output 1 sound card, track 2 on the input and output 3 5, etc.., Which has been possible since version 3 (newer versions not tested). What happens is that since this version, Audition has abandoned support for MME / WDM benefit well on ASIO. And the kicker is that in version 3 at least, it is not possible to assign individual track such as entry and exit as ASIO, you can make these settings globally on all software. And secondly, version 1.5 weighs less than 40 MB, which is really a featherweight compared to around 240 MB version 3.0 - and it has not so many new functions. And I&#39;m not talking about that later versions are certainly more severe. So, I still use version 1.5 with support for MME / WDM and all goes well ... until I have my hands this sound card M-Audio FastTrack Ultra 8R.

In fact, I tried it on a Windows XP SP2 PC and another PC but Windows 8 64-bit and you will not believe your ears: MME / WDM sound card that comes with not only support the first 2 input - output card. 8 inputs - outputs are supported by the ASIO driver only. And again, routing audio to and from the computer does not pass through the internal DSP sound card! Therefore impossible (MME / WDM so) to assign incoming sound effects or 8 inputs to route audio channels 1 and 2 of the USB bus.

So here I am "fired bullets." At first I did not believe it, I thought it was a joke! I thought it was the drivers that are incompatible with Windows XP, need a newer version of Windows. But no, it&#39;s not because the mixer comes with software drivers to work, it under XP. I even managed to drive the DSPs internal sound card from there.

I also said that perhaps no MME / WDM driver is supplied with drivers (that only come with ASIO drivers) and, therefore, in MME / WDM, the USB driver generic audio Windows XP that is used but no, that&#39;s not it either, because otherwise he would wear, if I remember correctly, the "USB Audio" or "USB Device" instead of the name of map.

I ended up injured because this subtlety was not mentioned anywhere in the instructions that came with that I consulted in PDF on the internet before buying. And I&#39;m left with a device on the arms that I could possibly use as a preamp 8 channel microphone. For this point, I&#39;m rather surprised by the good sound quality. Precision, cleanliness and discipline. Internal effects processor: a bit basic reverbs are very average. But now, buying a sound card 8 channel was more urgent to me that preamp 8 channels.

Implementation quick and easy. Reliability depends heavily on the quality of the USB bus to which it is connected.

I&#39;ll have to separate myself from this card, one way or another. It&#39;s a shame because the 104 dB signal - noise, this was really tempting, especially at this price point

What I liked about this sound card:
- Its clean and precise
- Can operate as a standalone 8-channel preamp, among other
- All inputs are combo XLR-Jack on the back

What I hated about this sound card:
- The WDM / MME driver supports only the first 2 input - output
- Damage to the input - output 7 and 8 can not be assigned to the input - S / PDIF output for standalone mode, which would have allowed also to use as A / D converter and D / A 2ch .

Did you find this review helpful?yesno
»
Read the 15 user reviews on the M-Audio Fast Track Ultra 8R »