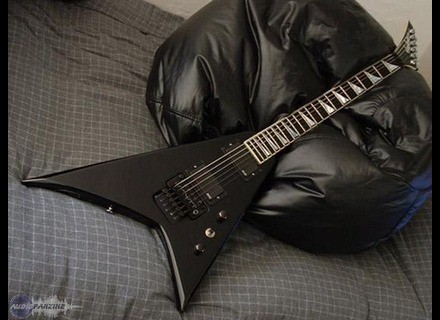 Jackson XTRR Rhoads
4
These guitars are pretty rare and pretty 80s. In the 80s they made the Rhoads models a bit smaller for the 80s players. The features are pretty nice and makes this a nice playing guitar. The guitar has a alder body with the smaller Rhoads design. THe neck is a 22 fret maple neck that has neck through construction. The back of the neck is oiled and does not have a thick finish on it. The fretboard is ebony with 22 jumbo frets. The bridge is an original Floyd Rose with a locking nut. The pickups on the one I tried out were not original. I believe this guitar originally came with Seymour Duncans but the one I tried had a set of EMG's with an 81 in the bridge and a 60 in the neck. The controls are stripped down for shred with just a master volume and master tone with a 3 way toggle switch.

These guitars were part of the 80s trend of making the guitar shapes smaller. I think it was because the glam guys playing back then were not of a very strong build. With a typical Glam guy in the 80s if they were playing a Les Paul it might look like they were playing a 335 due to their small build most likely due to extracurricular nasal decongestants. But Dean and other guitar companies were doing the same thing. Putting out smaller versions of their guitars. This is part of that and I think this is the only one of those old mini guitar models that had some lasting impact in the guitar industry. Because of the smaller body some of the natural balance of the guitar is taken away. This guitar is slightly neck heavy now but with the smaller body it is lighter overall. The neck on this model has a oiled back to it. It does not have the same finish that the rest of the guitar has. So the back of the neck is super smooth. This combined with the thin neck and compound radius means the guitar is super easy to play.

This guitar probably had some crazy outdated Dimarzios or something when it came out. By the time it got to me it had a more modern sound to it. It had an 81 in the bridge and a 60 in the neck. It still retained a lot of that bright 80s sound but in a more modern sounding package. The 81 has a bit of that sharp 80s sound to it but a more modern voicing overall. Its sharp sound helps prevent your riffs from getting muddy. The 60 in the neck is a great counter part to the 81 in the bridge. The 81 does not clean up very well so the 60 is there to fill in for that lack of ability. The 60 is a lot smoother and has a bit less output so it has a more natural clean tone to it. This guitar also had the 18v mod. This means the pickups in the guitar were running on two 9v batteries instead of one. This guitar sounds even better than a normal EMG set because of this. This helps give the EMG's in this guitar a more natural sound.

I would not really recommend getting one of these over a normal RR. They are a lot rarer and a bit more expensive. The only real advantage you get over an normal RR1 or something is the raw neck. This helps playability a bit but not a lot. If you are use to bolt on neck guitars you will like this. You can have this done on any guitar, any competent luthier would be able to do it for you. If you come across one of these for a good price you might as well pick it up. They are pretty desirable among Jackson enthusiasts.
Did you find this review helpful?yesno
»