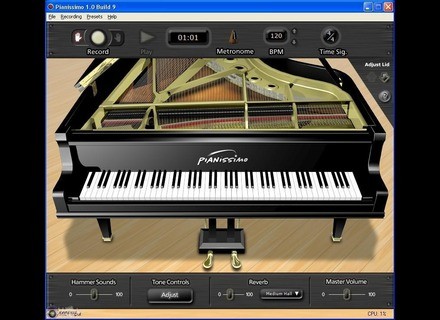 Acoustica Pianissimo
4
Acoustica Pianissimo is virtual piano software that can be used as a standalone piece of software or as a plug-in in your DAW. It is available in AU, VST, or RTAS formats as a plug-in. I've used it both as standalone software and in Logic, but I don't own this software on my home system. Since I don't own this software myself, I wasn't involved with the installation process and can't really speak about it. The interface of the software offers up a whole lot of control over your sound, with a ton of different preset starting points that model all sorts of different acoustic pianos. For example, there are piano sounds modeled after Yamaha, Steinway, and many other famous piano brands. The amount of control over the different pianos is really outstanding, as you have absolute complete control over what you're end result is. Beyond the control, which would is too in depth to go into detail here, the sounds are some of the best that I've heard when it comes to digital piano modeling. It's definitely the most realistic sounding virtual piano that I've heard, as I really can't think of another that I like more. I'm usually not opposed to using this on recordings of all types, but in general I do like to use a real piano when possible. However, this isn't always something that is possible, so when it's not Ivory would definitely be my first choice for a virtual piano. The price is definitely reasonable, as it isn't too expensive but also isn't dirt cheap. It's definitely worth it if you're going to be using a virtual piano a lot, as in my opinion you're getting the closest thing to a real piano in the digital world. Pianissimo virtual piano is a must have more anyone putting together a virtual suite of instruments.

Acoustica Pianissimo
5
(Originally written by Ehma2Retour/translated from Audiofanzine FR)
I tried it out a couple of hours.

It sounds quite good.

You'll need plenty of space available in your hard disk (less than with Truepianos and Pianoteq but more than with several giga sample banks) and the sound is pretty decent.

It's a pity that it only provides one sound (with a few variations) and that the presets have a very annoying reverb.

It's probably the worst from all three (TruePianos, Pianoteq and Pianissimo) but it's good and authentic enough for solo piano tracks (it might be comparable to TruePianos).

It could sound more natural and expressive (like Pianoteq) and it seems there will not be a Mac version available anytime soon.

Its main advantage is the very low price for a decent sound quality.

It's a better solution than a digital piano.

I will buy it to complement my collection even though I believe modeling technology can't come close the quality of a good sample bank like Sampletek... but it takes less time to load, which is a big advantage.

The price makes it a good product. If it had been three times as expensive I would give it a 6 or a 7.

But don't worry, the sound is really satisfying!
Did you find this review helpful?yesno
»

Acoustica Pianissimo
5
How long have you been using?

Did you try many other models before buying it?

... Pianoteq, true piano, and other "inputs range" much known yet lower then my opinion ....


What is so special that you like most and least?

.... sounds (the ten presets are more than variations) warm, subtle reactivity to touch, its very large computer lightness and finally
price, surprising for a virtual piano that quality.

... absolutely, by coupling with the Garritan Steinway very nice day
j or improve my computer configuration.

Anonymous 's review (This content has been automatically translated from French)" My piano bedside."

Acoustica Pianissimo
5
I post a review Pianissimo because it is contrary to previous opinion.
Not that the previous opinion is wrong but it shows that we all have a very different perception of piano sounds and digital software.

For my part Pianissimo is the best compromise realism / playability of other apps mentioned by Ehma namely Pianoteq piano and True.

When I try I find the True Piano sound pretty good but I closer to the sound of a digital piano as an acoustic piano.
With Pianothèque I really evil.
The setting options are excellent but in the end my ears can not find the sound credible.
I can also compare it to the Garritan Steinway is superior in sound quality, very playable but can seem a bit "soft" live.

By Pianissimo against satisfies me for the feeling of realism it gives me.
While the sound may be worse than the other three, perhaps less "end".
But it gives the fingers feel like dealing with a piano, especially in the media who are really poor parents of the numerical simulation.
It also has the good taste not to produce sound when you pushed a button slowly, like on a real acoustic piano (something do not do the Garritan Steinway, which is still a reference for my piano recording.)

In the end I agree with the previous opinion by giving the same note and agreeing at the price it costs this app is a real business that can give more satisfaction than a digital piano.

Did you find this review helpful?yesno
»
Read the 5 user reviews on the Acoustica Pianissimo »

View all 4 videos of Acoustica Pianissimo »