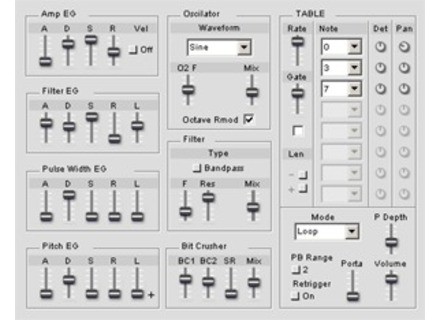 Oli Larkin SE64
5
The Oli Larkin SE64 is a unique and free virtual synthesizer. It's unique because the sounds heard here are from vintage video games! It's a monophonic synthesizer that runs with two oscillators. The synth is unfortunately only available to those DAW users who have a Windows operating system and can run VST software. It should be a quick and easy download, but I honestly don't remember too much about installing it since it was years ago now and I'm not currently running it due to an incompatible system. As far as the make up of the synth is concerned, it's got the two oscillators, one of which can be set to a few different waveforms and the other which is set to a triangle waveform. The synth also has envelope control for a filter, amplifier, pitch, and pulse width, in addition to have controls for a matrix table, a bit crusher, and a variety of other specific controls. I doubt a manual was made, but you should be able to find all the information you need right from the Oli Larkin website.

While I'm no longer able to run the Oli Larkin SE64 plug-in, when I did it was in Cubase SX 2.0. I had a Hewlett Packard Pavilion dv8000 Notebook computer with a 3.0 Ghz processor and 2 GB of RAM that I was using to run everything on. I was able to run the synth without any issues at all, as I believe will be the case with nearly everyone running it - it doesn't take up very much processing power at all.

Oli Larkin's SE64 is definitely one of the coolest virtual synthesizers that I've used as it's totally unique. I don't know of any other synths like this that just focus on sounds from old video games, but it's a pretty awesome idea and it's even cooler that it's free. The aim I think is definitely achieved here, as it's possible to get a nice collection of varying retro game sounds for sure. This is really a must have for anyone who has a compatible system which unfortunately does not include myself at the current time.
Did you find this review helpful?yesno
»