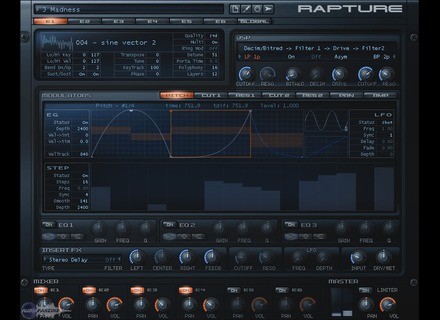 Cakewalk Rapture
4
Installing Rapture is a snap with no extra license manager applications to install. That said, the interface can be a bit overwhelming to someone first loading it. There's a page for each oscillator and each envelope for those oscillators which means making your own patches will require lots of flipping back and forth between the oscillator and envelope pages until you're done tweaking. There are also lots of small text options on the interface for adjusting things like detune, velocity tracking, etc. It's not the most straight-forward interface, but the manual does describe all of the interface functions succinctly.

I've been using Rapture in production for about 4 months with no instability in REAPER, however Rapture seemed to have a bit of incompatibility with Renoise 3.0. Rapture would randomly spike CPU up to 100% and stay there, shutting down the audio engine and forcing you to restart Renoise for it to behave properly. Performance in REAPER is very respectable, though--Using a similar patch in Rapture, CPU use was roughly equivalent to Massive and Ultra Analog, about 3% CPU for a large pad sound.

Rapture is a wavetable synthesizer, which uses any one of over 200 sound files to use as the source for the oscillators and you can load in your own .wav files to use as waveforms as well. This opens up some very interesting sound design capabilities as you can load sounds besides standard analog waveforms to use for synthesis.

The presets showcase the sonic capabilities of the synth, however, Rapture has been around for several years and most of the presets sound quite dated for modern productions.

A major feature that sets Rapture apart from a lot of synthesizers are the envelopes. Gone are the traditional ADSR controls, replaced instead with the ability to draw your own envelopes using custom curves. You can make very complex shapes and get incredibly animated modulation. There's also a step sequencer to use with your envelopes for more rhythmic movement. For further sound sculpting, you can use up to 2 of the 19 filters and add built-in insert effects such as reverb, delay, and distortion per oscillator as well as use those globally across all of the 6 oscillators.

If you can get past the fairly cumbersome interface and dig into the possibilities that the multistage envelopes and wavetable synthesis can provide, you'll find yourself able to make huge, lush pads and insanely animated basses and leads. However, If you're mostly a preset player or aren't interested in complex sound design this may not be the synth for you.

Pros:
+ Capable of very complex modulation with the multistage envelopes
+ Many filter types and insert effects
+ Effects, filters, and envelopes are independent for each oscillator

Cons:
- Interface is overwhelming at first glance and fiddly. Lots of very small text and pages.
- Presets are dated

Cakewalk Rapture
5
It is possible to run into install problems.. You may need to open Program Data. Find it in View options on C drive.

The manual is easy to read and clear. It is extremely good manual. Very long and easy to read. It is not necessary to read the manual typically though on this synth because it is easy to learn.

Rspture works well in Version 1.22 update. The dials don't show numbers though on the filters which is bad. But it is possible to see them in midi mappable settings under the options click.

The oscillators do chain up to EFX like theyre supposed to.

Rapture is realistically analog to me and little saturation can be added without roughing it up completely. I can get it to sound like a juno or oberheim pretty easy by adding saturation to them appropriately.

Rapture has an upfront medium/hard sound great from rock, metal, rap, and especially hip-hop. It can also be used for Tiesto style trance and certain types of masculine things.

Ratpure is, medium/hard sounding. Moderately flat sound. Somehwat compressable. Very analog. Very masculine. And capable of very complex things. The most complex synth I've used. But still easy to program. The most difficult part is getting the right results out of the ADSR. Typically use an even straight line though.

There are a total of 6 oscilators.

I can't wait to make and manipulate it's waveoforms with an aftermarket waveform maker. NEat..@

Cakewalk Rapture
5
Cakewalk's Rapture is similar to design and look to their other main synthesizer, the Dimension Pro, but there is less sampling here, and more routing and effects features. With a non-aliasing sampling engine, over 500 presets, 6 individually programmable elements per preset, tons of filters, step generators, and LFO's, Rapture can do it all. It especially functions well with arpeggiating and step-generated synth sounds.

Each of the six sound elements starts with the basic waveform, and there are many to choose from that Rapture offers. You can even use your own waveforms and base sounds. There are no lengthy samples, such as pianos, organs, or strings, present here, which helps keep the synth lightweight, and it never sounds like a cheap sampler either. There is a DSP-routing section first, which sets the filters and effects (including distortion), and whatever routing option you want for those sections.

The main modulating envelope generator is probably the best feature is (and it is similar to the one found in Dimension Pro), the envelopes are extremely visual, and can be shaped and modified to very precise levels, without being hard to modify either. There are a few keyboard commands that need to be memorized (one key changes the envelope from regular to exponential, for example), but once you figure out the basics, the possibilities with this envelope generator are endless. Plus, you can use an envelope for seven different parameters, including filter cutoff, volume, pitch, and panning. If you've even been fed up with the lack of envelope control with other synths, that simply give you Attack, Decay, and Sustain knobs, then then synth is the synth for you.

Cakewalk Rapture comes with hundreds of great sounding presets, which show off the ability and versatility of the synth very well. The presets contain no funny business, as they are easy to load up, view, and recreate. With this synth, it is very easy to recreate any of the preset sounds, which can't always be said with some synthesizers, as some synths tend to have hidden or hard-to-edit settings.

Overall, Cakewalk's Rapture is a solid synth that specializes in arpeggiated and step-sequences synth sounds. Be sure to check it out if you own a PC-based workstation!

Cakewalk Rapture
I held off purchasing Rapture for about 2 years after it debut in the soft synth world, however after viewing Computer Music's recent Top 10 Software Synthesizers special video with Rapture coming in at 7, I decided to go ahead and buy it. At first glance right off the bat after I purchased it I could tell it was going to be a great software, and it ran great on my mac without a problem. I haven’t had a crash year, I havent tried it with pc yet, so im not sure if it will run good or not. I own so many different softwares, but this one stands out from a lot of the ones that I have, and the best part is that this one is actually cheaper than a lot of other softwares that I have. Doesn’t take up too much space on the mac either, got to love that!

I was astounded at the extremely wide palette of sounds that Rapture offered. Not to mention the mind-blowing sound-shaping capabilities that it offered! It'll probably take you a whole lifetime to play with all the sounds in Rapture!

The sounds were absolutely full and rich, and lives up to the hype that its very inspiring with sounds like no other soft synth out there. I got engrossed experimenting and doing minor tweaking of the sounds to suit my taste. But really; not much editing is needed for someone like me because the presets already sound great!

My only complaint is that there is no defined arp section or effect plugin that you can insert a sound into. I believe I got more bang for the buck in Rapture than I did for Spectrasonics' Atmosphere synth module. The Cakewalk Rapture has good stereo image very full and wide. Still learning how to use it. Haven’t read the Manual yet but so Far I think this is a Keeper.


Did you find this review helpful?yesno
»
Read the 8 user reviews on the Cakewalk Rapture »