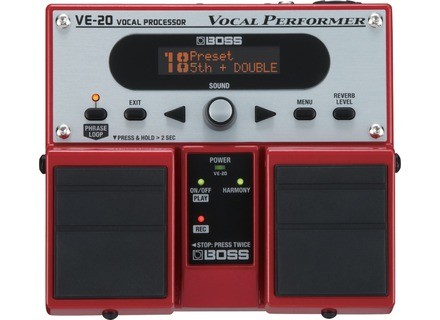 Boss VE-20 Vocal Performer
1
Those who think this piece of shit sounds good:

Were either advised by as a shop assistant with a witty eloquence.
Or they love unconvincing things that deform everything and, especially, have a more awful voice than the one that comes out of this crap.

I've owned it for 2 years. I used it for 4 concerts, 10 rehearsals and then added it to my collection of electronic crap that makes me vomit.

Did I try other products? A very short reverb, a beta58, a gate and, especially, a good sound engineer who makes sure my voice comes out like it should. When I showed him with great excitement my new acquisition, he just laughed in my face...But he did try it out. He's still laughing. The bastard!

What I like best: The look on the shop assistant when I asked for my money back two hours after buying it. He wouldn't do it! Yeah sure! He had it on demo for months. People stood in line to try it out and laugh. But he got me when I was drunk.
I do like its color. You can glue a flashing light to it and it would be a hit at fire department parties.

What I like the least: It produces feedback. It isn't natural! Metallic, artificial vocals. I heard a guy proudly singing with this crap. He added a third to his voice. If you closed your eyes you'd think a guy was burping a third! It's surely okay for a punk or satanic band.

It's really not good. If you need backing vocals while you sing, get people who can sing, it's better.

I used it for guitar and got some funny results.

It's really very expensive for what it's worth. ...
Did you find this review helpful?yesno
»

Boss VE-20 Vocal Performer
Those who say this pedal is worthless don't know what they're talking about:

- Either they didn't read the manual
- Or they don't know how to sing.

Yes, because you need to, at least, know how to sing to use it and you can modify all the effects with the controls.

It's quite intuitive and, in case you have any problems, the manual is very clear.

Sounds can be easily edited, everything runs smoothly.

The built-in Loop pedal could've been a bit more elaborated, but with only two pedals it's obvious that you'll be somewhat limited by the functionalities sometimes.

In fact, live, it's hard to play with harmonies and, at the same time, trigger a loop because you need to push the Loop button with your hand.

It sounds really good, even if some harmonies sound a bit metallic in the high end.

I've been using it for two years, in the studio to record quick takes and, live with an entire band or with a duo. It's good and beautiful.
Did you find this review helpful?yesno
»

One or several effects can be set on or off engaging the pedal on the right.

The looper effect seems all right, but I can't tell you any advantages about it because I don't use it much.

XLR connector, with the possibility to supply 48V to a mic.

It works on batteries or with a PSU. Go with the PSU, it's better

What I really hate is that you can't save any settings. If it breaks down, you'd better have all written down on paper...

You need to get used to it. There's nothing worse than setting off the looper in the middle of a gig. But once you've spent several hours fine-tuning the settings, there's not much to do.

To browse the menus and settings you use the wheel and two buttons, plus the display (one line, 20 characters). It's pretty annoying.

Personally, I prepare each song on the box, with volume, EQ and, eventually, effects. The same goes for the reverb....which varies with the song. That way, a live performance is more homogeneous, be it a ballad or a more upbeat song, the level of the vocals is always perfectly adjusted in relation to the rest.

There's not much to say regarding the quality of the sound. I'd say it's very clear.

The pitch correct ought to be used sparingly, unless you want to achieve the "young-modern-singer" effect.

The flanger is not deep enough for my taste. When you use this effect it's often to make everything a bit muddier.

I've been using it for two years live and for rehearsals. Right now, it has become indispensable, up to the point that I've considered buying a second one as backup (this kind of gear usually breaks down right before a gig).

The biggest drawback for me is the impossibility to edit on a PC and to make backups. Other than that, it's truly impeccable.
Did you find this review helpful?yesno
»

PaulyPaul's review"All effects are in real time, great for live use"

Boss VE-20 Vocal Performer
5
The Boss VE-20 Vocal Effects Processor makes some really good harmonies that you can use with your lead vocals in real time. That’s why the VE-20 is a great processor to have for live use. You can also loop and record with the Phrase Looper options, you can also do that in real time as well or you can do it while recording in a studio but you only get around 30 seconds of record time to loop.

The Boss VE-20 has some powerful effects like, robot, strobe, chorus, reverb, electric and a few more. All of them have a great sound to them and will add some much needed life to your vocals. I have used this unit in a studio before but I feel like it's more designed for live use. You won’t find another Vocal Effects Processor like this one unless you spend at least 400 dollars. The Boss VE-20 only cost a little over 200 but for everything you get with it and its on-stage ability makes it almost priceless.

The VE-20 has onboard phantom power in case you are using a condenser microphone. All of the pitch correction and effects are in real time. My favorite vocal effects are harmony and the delay.

They are really colorful and clean. If you don’t want to use a preset you don’t have to , there are editing controls on the VE-20 that will let you create your own effects but it won't come quick or easy. It will take some time to get used to creating your own stuff and you will probably want to watch some tutorials and read the manual before you begin with that process. The manual will tell you everything you need to know, it is well written and easy to understand and comprehend. If you are a live vocalist then this unit is something you must buy right away.

Did you find this review helpful?yesno
»
Read the 16 user reviews on the Boss VE-20 Vocal Performer »

Published on 12/21/09
Boss brings effects processing to the performing vocalist,in the design and simplicity of a twin-pedal stompbox, with the VE-20 Vocal Performer.