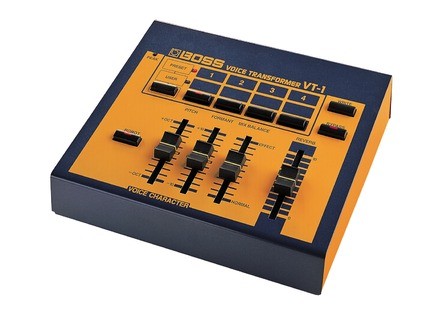 Ducasso's review (This content has been automatically translated from French)" Fun, simple, old-fashioned"

Boss VT-1 Voice Transformer
4
A good old analog effect to the former rather vote for. That said on instruments it gives some strange sounds and reverb is ... "Space". Settings pitch, forming balance (wet / dry), key robot.
4 presets, 4 user memories.
Input jack adjustable sensitivity (mic to line).
Outputs unbalanced microphone or line levels 2 RCA jack. The line output level is a little low but it does not bother me.

Using extremely simple and intuitive. The only risk is to send a line level input while sensitivity mic is keyed on, but the LED clip is there to warn us. That said, it is analog, so it can provide a useful little natural saturation of certain effects provided go with moderation.

It sounds old-fashioned. Like an old analog what effect.

I have since 2007, he has not left my bag since I bought it. There are not a lot of options, but I sent him so many different sounds real instruments that even if there is some possible settings, it seems that I carry around with several analog synths and their effects racks.
Who want to vote for star wars or tamper tools to create surround sound is perfect. It is more cut for live. Strong, lightweight, simple, indestructible.

the bubble's review (This content has been automatically translated from French)

Boss VT-1 Voice Transformer
4
everything has been said in the notice above. all done by hand and were able to make backups. very simple device. connections: rca out, mono jack in / out (microphone) no xlr the unit is old!

the manual is very short and not need it we quickly understand. One downside: it turns on with the forming and should be off to find his voice "normal".

effects are very effective, very dangerous for a small device as old. Obviously, I use it for voice (it is made for it). I like to see anything but the style "robot".

I've had at least 20 years, bought by chance at Tours used. I had paid a high price at the time just for the reverb and the Board of knowledge ...... I do not have served more than ten times since then: it's gachi. I had never tried this type of device before, but I find it ridiculous even today! on the other hand, it must be set as the gain over the middle breath (very) high, it is the only bad point of this device. Today I do not rachèterais this device but just a reverb, I keep it anyway just in case, you never know.
Did you find this review helpful?yesno
»

freezerman's review (This content has been automatically translated from French)

4
Indeed it is a box that can do many things with one voice. change the timbre, form, pitch and so on. It fauit a child's voice very realistic from a male voice and vice versa. there is also an effective 'robot'. the reverb is not great enough 'Cathedral metal' but it can be used in small doses. By saturating a small gain results in a distortion quite effectively.

I tried to switch from a voice inside stuff, but it provides little in fact. I thought I could pitch guitars as well as voice, but it is clearly for the voice: it gives very little with other sources.

the connection is faiblichonne. a microphone / line in jack (in fact the gain to switch from one to another, it is on the back is a tiny button, it damned difficult) and stereo RCA output.
4 utilisatuer memory can store and recall four settings. there are four preset settings, but no more. can act as a mic preamp if you are not looking too much on the breath, I would recommend it to any singer who wanted to tamper with his voice.

this thing is pretty tough, metal is well suited to use in live and to be carted around.

I do not think it's worth 150 euros (for that price you must buy a box full effect over the time) and certainly not 300 euro.

I put in note 5 because it's a nice effect, but as I have not paid (thank you Tof '... you can get it at home whenever you want!) is more difficult to judge.

good's review (This content has been automatically translated from French)

Boss VT-1 Voice Transformer
5
effects although the name rpondent Voice Transformer: pitch, robot, reverb ...
I have not opened the unit and I do not like reading techniques dtails! But the case is made to last mtallique ... Robustness of knobs and the gear. A must for scne ...
The presets can be counted on the fingers of both hands, but are more than enough ... Obviously
jack and cinch
not at all ... It is true that a rack rack MODEL Labor could have more cardboard ...

Absolute simplicity! I have not bothered to read the manual ...

performance for the kind ...
for voice only

I bought a few years ago ...
effective in such electro-EBM-dark-techno-trance ...
a rack version but no longer have t CHRE a must ...
The purchase price is a little Obviously lev but when it becomes unavoidable perspective inception, the sacrifice is worth it budgtaire ...
no doubt ... It does not quivalant on the market ...

Did you find this review helpful?yesno
»
Read the 5 user reviews on the Boss VT-1 Voice Transformer »