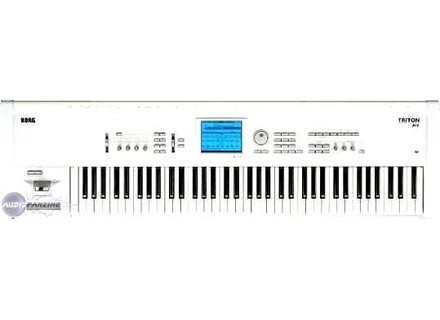 Triton Pro 76, Workstation from Korg in the Triton series.

Korg Triton Pro 76
5
I've been looking for a workstation to complete my keyboard sets. I am into dance/r&b music and my collection at that time were compose of Roland JX305, a Roland JD800 and a Yamaha Clavinova CVP96. I've been saving up for a Trinity when the sales guy told me that there is a new model called Triton. I check it out and found that it has the Trinity feel and more. I have to raise my savings even more cause it cost me $2900 to get this baby. I opted for the Pro from the basic cause of the 6 octaves keys. The ProX was too large and bulky and its keys were too heavy and slow in response for my playing style.


I like the fast screen refresh and the ease of use. You don't need to read too much of the manual to learn the basic. The touchscreen has it all. I'm now upgraded to the latest version 2 OS. The category menu is a good tool to move from one patch to another. The combination & program patches sounds great and can be use without much tweaking. And talking about tweaking, there's nothing like 4 assignable knobs to tweak on to.


The MOSS option (if you want to get the Z1 sounds and synth) is kind of pricy at around $500. If you have nothing against a silver color keyboard in your collection then I have nothing much to say against this baby.


Triton Pro looks sturdy and feels like it can take any abuse (either from the roadie or the performer), obviously the most sensitive parts would be the touchscreen and the ribbon. The bender/modulation lever does buldge a bit but should take any snag.

If you travel a lot an octave of keys less doesn't matter then I would suggest the basic Triton. And do get a hard case for it.

Sergiooo's review (This content has been automatically translated from French)

It takes a little time but ultimately pretty easy

APRS 3 years of use I am satisfied