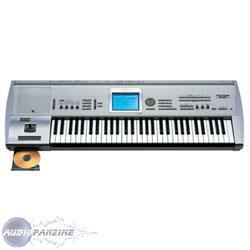 All user reviews for the Korg Triton Studio 61

Workstation from Korg belonging to the Triton series.