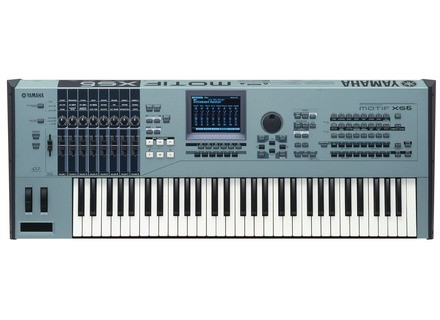 MOTIF XS6, Workstation from Yamaha in the MOTIF series.

Yamaha MOTIF XS6
5
The Yamaha Motif XS6 blew me away when I was in guitar center playing around with it. I knew I had to get it. The Yamaha Motif XS6 has 5 octaves and a ton of options and presets for you to explore around with. You can pretty much build a sound from scratch with this thing. It can be a little overwhelming at first because there are so many options. But the manual is very clear and extremely easy to understand. I used the Motif why my windows vista computer and there where no issues. I basically used it as a VST instrument.

You can create, arrange and complete a whole song with this board without having any other piece of equipment. It runs just like most computer music creation software that there is out here. It has all the in outs and midi that you will need for our set up. You will be blown away with the sounds that this board can produce.

The sounds are very nice, they are very techno and R&B related. So if that’s up your alley go and get this board asap! There are a ton of presets that are ready to go and you will actually hear a lot of these presets in today’s music that you hear on the radio. The board itself is very sturdy and strong. Its built to last, and I haven’t had a single problem with it.

I am extremely happy with my purchase of this, I wouldn’t have chose any other board over this one, the quality of the sounds are crazy! This is a industry standard board, all you have to do is apply some of your creativity and you will be on your way to the top 40! The price is kind of high, but you have to play for good quality.

petitsynthe's review (This content has been automatically translated from French)"Quality and versatility!"

Yamaha MOTIF XS6
5
I recently went to the ES pattern motif XS because I had the opportunity to have a good price (1100 euros in state irrépprochable with 1 GB of ram, a good cover and it was also for sale in 10 minutes from my home, that it helps too).
As I am relatively hard AF forums, I realized that most of the users who had switched from XS to XF were often disappointed, not the machine itself, but by little change between two models comes down to a few banks actually sounds more flash and RAM, ie the samples loaded in RAM are volatile memory (such as ROM): there is more time Wait loading the samples users.

But why pay a machine more than double for those little extras that are not as "luxury" for me and most users?

As for build quality, it is really excellent.
The same goes for the touch keyboard which is in my opinion the very best in the category hit "synths" (compare with so worksations input range as the Roland Juno-G or Korg M-50 .. .)

The reason ES was excellent, but ergonomics had ... say "special", not helped by the size of its screen.

on the other hand, a pity that we lost the ability to add maps PLG synthesis (DX, AN and VL) who brought a real plus Yamaha sound level but abandoned them because they are poorly sold.

The pattern sequencer is fun to use and especially suitable for composting type intro / verse / chorus ... However, to save time and to change my habits a bit, I intend to soon connect the Motif with my brand new iPad mini + Genome MIDI Sequencer app to create my next piece, when lightning adapters MIDI to emerge in spring.

Compared to the Motif ES evolution is fairly clear at:

- Ergonomics, mainly due to the correct size color screen that can display more information (but not too much like the KORG Kronos). The fact that it is not touch does not bother me too much.

- Some combis much better thanks to four simultaneous arpeggiators, besides the number of arpeggio pattern to also greatly increased: it is clear that we are very close with new arrangers arpeggios "_XS", but without fill in / fill out and direct access with simple styles, which is not bad for me.

The danger is too combis use laziness, because it sounds right now (and get bored pretty quickly) and shot to miss the real interest of the machine (workstation) and create their arrangements sounds.

- Effects which, though they were already excellent on the grounds ES, it is still a leap forward thanks to simulations of effects "vintage".

- Most of the presets are actually used in a well-balanced arrangement and sound frequency, whether to mix them all together or alone (not like a juno-g for example ...) I also think almost all categories of sounds are very good (except strings) without being "exceptional", which may eventually become an advantage to create arrangements homogeneous
Let me explain: create a good arrangement and add a realistic saxophone sound "synthetic" and "squeaker squeaker" to play the melody: it&#39;s only draw all the realism previously acquired strongly down!

Also having the Korg Kronos (which I love) and even though it is a bit of luxury these days have several Workstations, I can say that the two complement each other very well (better touch, better acoustic sounds "of origin "- except pianos - grain and ergonomics different, much less possibilities of synthesis, etc ...).

The sound overall is not likely to boost the bass and make too much difference in volume between different presets as is the case on the Kronos (the track "drum track" in particular) in the original configuration (but c is fortunately changed course on the latter).

Some banks on the free site "moessieux" which are extra excellent ethnic sounds and above all a great Yamaha CP80.

To conclude, I would say that for a little over € 1000, this pattern still holds the road very well almost 5 years after its release and remains a safe bet
when you buy a pattern, there is certainly not to "wonder" special but never surprises, with both the quality of their banks and their sides versatile.

This is a "must" for the musician with eclectic tastes who likes to compose in many different styles.


21 of 21 people found this review helpful

noamsub's review (This content has been automatically translated from French)

Yamaha MOTIF XS6
5
I regret the absence of the optional mLAN (Firewire) on the XS6.
Otherwise intgration in Cubase is a plus compared to competitors.
Big plus also for the 8 faders.

The manual is good for a manual workstation.
Otherwise, the ergonomics and architecture of the menus is a little more than Austre KORG.
Overall enjoyable to use.

Word, the acoustic sound is breathtaking (strings, wind instruments). When I got much better than KORG.
Electro sounds are good too.

Excellent workstation. I do not regret my purchase. If I had to redo the choice between the KORG M3 and the Motif XS, I would resume the XS.

Grans's review (This content has been automatically translated from French)

Yamaha MOTIF XS6
5
The new touch is great, the joint is not gadget
we feel transported by this synth when playing.
faders, ribbon, assign top are for the scene

What about dep read?
sound pro, hotter than the ES SERIES, thinner too.
a large plant

One of the best current workstations?