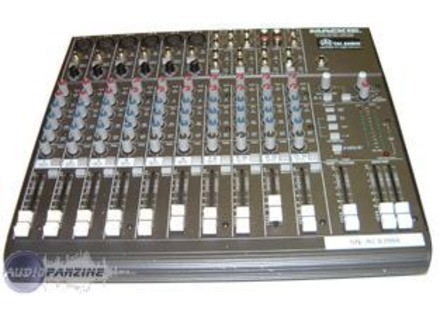 MS1402-VLZ, Analog Mixer from Mackie in the Micro series.

LoHerry's review (This content has been automatically translated from French)

Easy to use, very well thought out. One could say that there is no need to use a standard manual!

It can be used as a simple setup that much more complex.

Everything is easily accessible, clear, effective.

As against only one regret: the manual is in English. But every line is important because some section show some of the subtleties of use interresting.

Very good quality of AOP.
Blast near zero on all volumes fully.
The corrections are very effective and fall on the fundamental frequencies.
The dynamics are good, revealing a transparent whole potato instruments.

I have my console for 5 years now, I never had any kind of bad with surprise!
Frankly, not much to say, good as no disappointment ...

I do not really valid comparison to make since the only true as I could do was console with Ross RCS-1602, which has nothing to do in terms of dynamics, breath and quality ...

Even if the quality is there, I do not know if the quality / price ratio remains interesting today, especially when you see the new models coming out lately.

Despite this small problem, the fact remains that it is a great console.

Mackie MS1402-VLZ
5
This is a small analog mixer 18 inputs: 6 inputs for microphones with prampli, with XLR and phantom alimantation taken to insert line + 8 inputs + 4 returns to ffects. And has 4 outputs. Between 7 and 14 are couples in Stereo (8 entries = 4 between stto).

Each channel includes as rglage, in order of signal routing:
<ul>

Sending to post-fader external effects only

MUTE (sending the signal to outputs 3 and 4)

Sensitivity of the VU meters: - 30 + 28 dB. With more master outputs on XLR + jack + cinch, monitoring output, headphone output and feedback loop recorder cinch. With the exception of the headphone output, all connectors are TRS jacks symtriques. It yammer a slecteur, acting only on the master XLR output, which transforms the signal into a signal line microphone

))) So it is possible to connect the table on a mic camscope, for example. :-O)) So, pity she does not run on batteries or batteries: it'll have been able to Adjoining the camcorder outside ^ ^

For the little know what are all these connections (and there are many for a mixer of this cathgorie! ^_______^), The table is easy to use! Not need the manual (which is in English). Well, I had the DJ Mackie Micro Series 1202-VLZ but the volume faders (instead of knobs, on the other) and look a little more serious sduit me, especially as the diff reference price with her little sister n'tait not standard. In addition, small DIMENSIONS still make it transportable ^________^ trs

I was serving as additional mixer for my Akai DPS16 multi but the problem is that I have to remove it and use a Behringer RX1602 the place, both rack-mount, allows me to r cuprea the place it took in favor of three groovebox: Yamaha RM1x, DX200 and AN200.

But hey, even if I do not use, I care even when-as it is good quality too ^ ^ and above all, the famous possde attnuateur that connects its output XLR microphone inputs and, as far as I know, it's rare ^ ^ ^

The audio sounds trs "Mackie". Not a pet breath

I have for quite some time. As her little sister Mackie Micro Series 1202 VLZ it actoy gnrations of several multitrack. Robust, I feel it will take me much longer. Indeed, although there is a 1202 VLZ Pro has been released since then, no need to change this dernire expr ^_______^ In my opinion, this table is the best of his cathgorie. Especially since the new range Onyx (offering an optional FireWire interface in which each channel of the table can be numris sparment 24-bit 96 KHz to be sent the computer! ^ ^), there is no dquivalent 14 entries, hlas. There is the Onyx 1220 (one to 12 between which succde 1202 VLZ and 1202 VLZ Pro) or either the Onyx 1620 is a 16 direct entries (if they do not count the effects returns).

In my opinion, for analog tables, large tables or studio sound is Soundcraft. And small, it's Mackie. Without hsitation.

Super simple, but still flexible
functions are intuitive and the manual is completely genial.

Transparent and absent breath
the eq is not great, but for karaoke or a DJ, it is sufficient

I love soliditbr /> and the efficiency VU

it is nothing else to say

Wills01's review (This content has been automatically translated from French)

Mackie MS1402-VLZ
5
Rackable? probably ... I do not know
It is simple (no effects ... but frankly I do not see the point where the price pierces them now).
There are about all the connections you want.
A strength: reliability: no spitting ... the knobs. It slides perfectly despite the age and dust ...

A machine of great simplicity. The instructions can be read just for fun (the guys at Mackie of humor!). It is very simple and very clear ... There is an overall pattern that allows totu understanding of the beast.

So there: hat! I am working stream for a fairly old machine, the sound quality is perfect. Using the XLR inputs, good cables ... no breath. The equalizer is good.

I have over 10 years: no fault and always the same ease of use (they must be bored to customer service ... because my Mackie Onyx seems to be of the same quality).
I had several other consoles including a Berhingher was a priori more attractive (more channels, effects ...) except that the headphone jack I remained between the fingers (the quality is frankly to be desired).
So the VLZ was a little more expensive but it was justified!